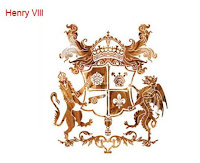 "You that thus far have come to pity me, hear what I say, and then go home and lose me"
Not having seen Henry VIII before, I wasn’t quite sure what to expect from the second play in the Kings and Rogues season at Shakespeare’s Globe (this was the second preview) and as delightfully coloured cod-pieces and a mightily impressive heaving bosom (bosoms?) emerged in the course of the first act, I suspected we could be in for a right rollicking good time. This play takes place in the middle of Henry’s reign and follows the rise and fall of four important people in his life, the Duke of Buckingham, his first wife Katherine of Aragon, the Lord Chancellor Cardinal Wolsey and Archbishop Cranmer. It mixes up elements of history, tragedy and romance and wraps it all up in the opulent pageantry of the era but it also allows us to see behind the scenes, the gossiping, the politicking and those moments when the mask slips and we see glimpses of the real people behind the public personae.
It is full of stately pomp and circumstance and the set-pieces are visually stunning: Anne Bullen’s procession through the theatre at her coronation, Princess Elizabeth’s christening, even Katherine of Aragon’s trial, all are sumptuously mounted and there are some truly moving moments, especially at the moment of downfall of each of the above-mentioned players. But in truth Henry VIII plays as a series of episodes rather than a long play and there’s surprisingly little interaction between many of the key characters. This could be to do with the much-debated true authorship of the play, it has been suggested that it was a collaboration between Shakespeare and another playwright John Fletcher, though my knowledge on this is limited to reading the programme notes so I couldn’t possibly come down on one side or the other. Either way, there is much unevenness in this play and as a result it is only fitfully engaging.
Acting-wise, there’s a veritable treasure trove of little delights in amongst the key performances: Miranda Raison’s butter-wouldn’t-melt Anne Bullen filled me with excitement for her star turn in Anne Boleyn later in the season; Anthony Howell’s arrogant Buckingham turning beautifully eloquent as he approaches his death and the scene-stealingly good Amanda Lawrence as a worldly-wise lady-in-waiting to Bullen and also doubling as Henry’s Fool (although I could have done without the freaky puppet).
In the main roles, Kate Duchêne as the put-aside queen, Katherine of Aragon, is just fabulous and possessed of a wonderfully strong dignity. Full of pious rage that her God-given (as she sees it at least) situation is being challenged by mere men, she carefully reminds us that she is also a foreigner in a English court, feeling isolated in so many ways. Ian MacNeice is powerfully dominant as the coldly, calculating Wolsey, scything through anyone and everyone in order to sate his ambition and then dealing with his sudden fall with a graceful equanimity. As the titular Henry VIII, Dominic Rowan has a tough job in playing a character about whom there are so many preconceptions but also curiously here is rarely the focal point of the play. His morally ambivalent behaviour makes him difficult to warm to, the final rescue of Cranmer feels incongruous given the fates of most other people in the play and the rejoicing at the celebration of Princess Elizabeth’s christening feels wrong to the historian in me. In a play which revolves around people’s lives being horrendously affected through their contact with royalty, the King is never made to look bad, a clear nod to the reality of the time in which it was written and the need to maintain royal patronage, but unless I’m missing something, to me it felt too close to being hagiographic.
It is played firmly in old school Tudor mode: costumes are wonderful, beautifully opulent and suitably courtly. The stage is mostly bare, with red carpet marking out around the edge of the stage the corridors where so much happens. Yardlings can rest assured there’s no tricksy canopy here as in Macbeth, but there is a mini thrust stage which projects into the yard and stairs around it on which I really wouldn’t put your bags, as the actors do use them quite a bit. It looks good but it does mean that too many of the scenes are static, constrained by the corridor trick, and so the lack of flexibility in the use of space means that if your view is restricted at the beginning of a scene, it will be restricted until the end of it, I would have preferred there to be more flowing scenes. And musically I was disappointed: I was not a fan of the over-enthusiastic drumming, the background music playing in many of the scenes with the ladies was annoying and interfered with the audibility of the generally very strong verse reading and the weird sound effect that kept popping up in the scene shifts was just odd.
So it was an intriguing one: much to admire but little to love if I’m honest. Perhaps this was as much to do with my expectations as to what the play might be like, but I just did not feel much dramatic imperative pushing things along and it ends up being too episodic for my liking. It looks amazing for sure and it is impeccably acted but there’s just something missing, a lack of cohesion throughout, that magic ingredient to keep you fully engaged throughout. Ultimately, an inquisitive little bird stole the show for me, hopping around onstage for quite some time, even making it backstage at one point until it was finally shooed off by one of the actors. Sadly, this was probably close to being one of the most entertaining things that happened all evening.
Running time: 3 hours 5 minutes (with interval, although this was the second preview so subject to change)
Programme cost: £3.50