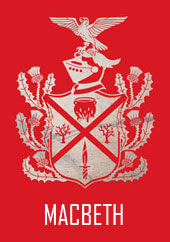 “Gentle my lord, sleek o'er your rugged looks; be bright and jovial among your guests to-night “

Opening the 2010 Kings and Rogues season at Shakespeare’s Globe on the South Bank is Lucy Bailey’s production of Macbeth. Fans of the Scottish play are being well-served this year: Cheek By Jowl may now have left the Barbican but you can catch them again in Brighton in May, the Open Air Theatre will be running a re-imagined for kids version in July or you can witness this decidedly less family-friendly production in the Globe.

Katrina Lindsay’s design has clearly taken the circular shape of the theatre into consideration and used the circles of hell in Dante’s Inferno as the main inspiration. The Yard is mostly covered with a canopy, with holes for the groundlings to poke their heads through, representing the frozen sinners trapped in the underworld, and it is also populated with the occasional bloodsoaked writhing tortured soul popping up. I can’t comment on how comfortable or otherwise it was, but there’s plenty of room outside of the canopy if you’re not too sure about it: it did look fun though. The weird sisters therefore are the guardians of this final Hell and flow in and out of there onto the stage, trying to drag as many people down with them.

And lordy don’t they get a lot of bodies. This is a production very much attuned to and unafraid of just how much death is contained within Shakespeare’s text: I don’t think I’ve ever seen Macduff’s family dispatched so brutally, both Duncan’s and Lady Macbeth’s bodies are paraded onstage, it’s all very bloody and gruesome and huge amounts of fun.


Casting the central couple a bit younger than one might have expected in the shape of hot things Elliot Cowan and Laura Rogers actually works surprisingly well. Their’s is a passionate, impetuous relationship, indeed the first time we see them together, they literally rip the clothes off each other and whilst a small thing, it cleverly roots their marriage as something real. Cowan’s “Tomorrow, and tomorrow...” was particularly heartbreaking as a result of this and throughout the play he did extremely well in resolving my doubts about whether I could deal with a sexy Macbeth (and by God is he hot, if looking evermore like Heath Ledger!). Laura Rogers also does well as a flirtatious Lady Macbeth, able to use her feminine wiles to win over most anyone. And the sense of limitless ambition fits quite neatly with a younger couple, not yet fully cognisant of the dangers of the reckless pursuit of power.

Elsewhere Christian Bradley’s Banquo impressed, especially with a great entrance into the feast and I just loved the weird sisters, Simone Kirby, Karen Anderson and Janet Fullerlove: they look like a twisted set of Russian dolls with their different heights and possessed of a palpable sense of malevolence in their meddling, never far from the stage or the action.

Costumes were nice enough, all blacks and gunmetal greys with just the weird sisters’ crimson outfits adding a splash of colour to proceedings. There’s the usual good use of music, sackbuts, didgeridoos and multiple bagpipes creating a discordant tense atmosphere, but I also liked the use of singing, especially in creating the sense of genuine camaraderie between the soldiers, but also in a early devotional chant with Duncan. But it is the rest of the staging which I found most effective. Chains and hanging baskets of fire circle round and the back of the stage is draped in billowing black satin with a black net curtain also sometimes circling the stage, echoing the influences of Dante. The curtain sometimes serves as a room divider, sometime as a veil between this world and the underworld of the Yard, either way it is clear that whilst this may be Scotland, it’s really just another circle of hell.

The only weakness for me is in the sagging of the pace during the third quarter of the play, as I’ve never been a fan of Malcolm and Macduff’s extended scene and the performances here did little to change my mind. This was a second preview, so I would imagine that the whole half will become tighter, but I fear I will never really ‘get’ that scene or see the need for its length. Otherwise, this is a highly entertaining, if blood-soaked production which augurs well for the season ahead, and not just because Mr Cowan whips his shirt off, honest!

Running time: 2 hours 50 minutes (with interval)
Programme cost: £3.50
Note: as they warn you “this is a gruesome production of a brutal play”!