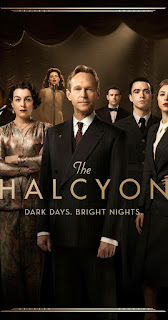 Billing something as the new Downton Abbey is all well and good but for someone who only ever watched the Christmas specials because his parents commandeered the telly on Christmas Day, it's not actually that much of a pull. What I can't resist however is Olivia Williams, and Olivia Williams in a period drama in particular, and so I put on ITV for what feels like the first time in ages for The Halcyon.

Set in a swish London hotel of the same name in 1940, The Halcyon looks to be your regular upstairs-downstairs as the aristocratic residents lounge about talking about Nazi sympathisers and swigging gin, while the honest-guv staff scurry around being decent and hard-working and dull and thoroughly unbelievable in the way that they chat so easily with their employers and clientele (just one of the things that bugged me about the little of Downton that I saw). 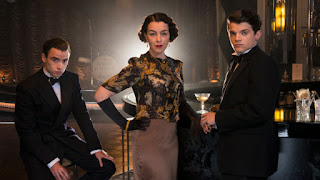 Writers Charlotte Jones and Jack Lothian possibly attempted too much in this opening episode by introducing far too many characters with far too little to do. It's no mean feat to fill 48 minutes with so little action and yet so many people but the cumulative effect was largely inconsequential for me. I didn't believe in any of the characters, or care that much, though I am sensitive for the need to give it a little more time to bed in yet.

Williams' Lady Hamilton looks set to be an interesting character, as long as the writing is more consistent for her, and the tension with Steven Mackintosh's general manager Garland looks set to be a big narrative driver going forward. I did enjoy Charity Wakefield's Mitford-esque troublemaker and Alex Jennings' soon-departed Lord but it's a crime to have Liz White in your show and give her nothing to do but look exasperated by a phone. So we'll see, I'll check in again to be sure but I'm hedging my bets on this one.