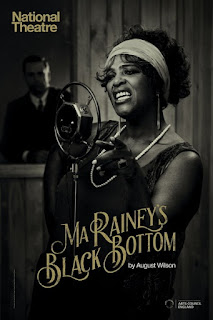 “This is an empty world without the blues“

The title might be something of a misnomer in that there ain’t a whole lot of Ma Rainey in this play but that shouldn’t detract from the extraordinary power of Ma Rainey’s Black Bottom, part of August Wilson’s Pittsburgh Cycle of plays examining each decade of the twentieth century African American experience. And Dominic Cooke’s production for the National Theatre loses nothing of its urgency, it may have been written in 1984 about 1927 but its incendiary racial politics are sadly just as pertinent in 2016.

Ma Rainey was one of the first professional singers of the blues and among the first to be recorded but the play opens with the ‘Mother of The Blues’ singular in her absence. Her manager and studio manager, both white, are fretting about her lateness and how financially dependent on her records they are and downstairs in the rehearsal basement, the four black men who make up her band are shooting the breeze as they gear up for some music-making. But as the wait grows longer, patience wears thinner and long-ingrained injustices start to bubble to the fore.

And it is the interplay between this quartet that really fires up Wilson, his poetic philosophising about the state of the black man explored in the contrasting viewpoints of elder statesman Toledo and young buck Levee. The former despairing at the way his fellow men seem to sleepwalk their way into tacit acceptance of the status quo, the latter’s braggadocio at apparently having negotiated his own deal with the label barely masking the resentment and fury at a family life full of violence. With colleagues Cutler and Slow Drag caught in the middle, the burden of white oppression acts as a pressure cooker. 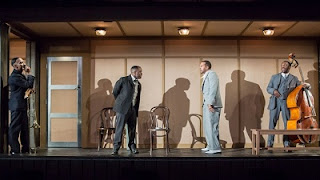 The eventual arrival of Ma Rainey provides a temporary relief, or rather a shift of focus for tension, Sharon D Clarke blasting through the stage in full-on diva mode with family members and girlfriends in tow. But we soon come to see that her behaviour is born out of frustration, it’s the only way she can exert power over a music industry, a society, a nation that denies her control anywhere else. It’s a brief but striking experience, as is her glorious singing, complemented by Tunji Lucas’ stuttering nephew and Tamara Lawrance’s nubile lover, whose gold-digging ways seem entirely justified in this world.

But in the stuffy confines of downstairs, styled by Ultz in one of his favoured letterbox designs, this is a man’s world. And Lucian Msamati’s intelligent posturing comes up hard against the heart-breakingly futile swagger of O-T Fagbenle’s Levee, with Clint Dyer’s charming but slightly caustic Cutler and Giles Terera’s bittersweetly-rich voice as Slow Drag struggling to maintain equanimity in the face of such raw pain as eventually crashes down. It’s stunning stuff and exactly the type of production our National Theatre should be mounting, as beautiful and mournful as the blues itself.