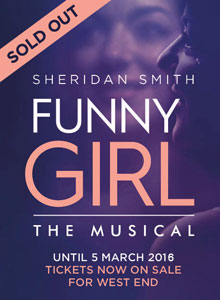 “I guess we're both happy, but maybe…we ain't”

As recently demonstrated with Adele’s 25, there comes a point where commercial success just trumps critical response even before the reviews have been published and digested. The Menier Chocolate Factory’s revival of Funny Girl broke box office records in selling out its entire run in mere moments, announcing its transfer to the West End and then selling a vast majority of tickets for the Savoy all before the show had even opened, such is the draw of star Sheridan Smith.

So in some ways it doesn’t matter that Funny Girl really isn’t a great show, one unseen in the West End for nearly 50 years. Musically, Jule Styne’s score front-loads its hits fatally and dramatically, Isobel Lennart’s rather insipid book runs out of steam well before the end, even with Harvey Fierstein’s newly introduced revisions. And for all of the strengths of Michael Mayer’s production, there’s little it manages to do paper over these cracks.

It helps that Smith really is possessed of that elusive star quality that (almost) justifies such advance sales. As Fanny Brice, whose journey from backstreet bars in Brooklyn to top billing in the Ziegfeld Follies on Broadway made a legend out of original star Barbra Streisand, she has the emotional range to cover the hilarious heights of this singer and comedian at work and also the heartbreaking lows as her personal life suffers considerable strain. 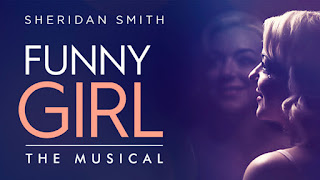 Vocally though, there’s a lot to live up with La Streisand and I would say Smith was strong rather than sensational, she doesn’t quite seem to have the innate confidence yet to really transcend the material, played beautifully by Alan Williams’ band. She connects well with Darius Campbell as her errant husband though, despite the role’s underwritten shortcomings, and there’s vivid work from Marilyn Cutts, Gay Soper and Valda Aviks as Fanny’s mother and friends.

There’s something frustrating too about the all-too-palpable sense that Mayer clearly has had his eye on the Savoy from the outset. Michael Pavelka’s elegant design with its reflective surfaces and ingenious travelators and Lynne Page’s expansive choreography both push at the seams of the intimate Menier but at these ticket prices and for a 3 and a half month run, it doesn’t feel like too much to ask for a show perfectly designed for this space, which is then latterly adapted for the transfer.

Far be it from me to rain on anyone's parade but this really did feel like a good show rather than a great one despite Smith's efforts, a strong production that will likely take flight once rehoused in the Savoy.