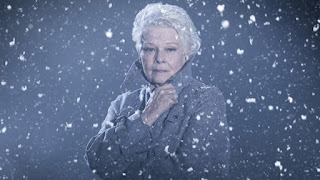 “I do feel it gone, But know not how it went"

Perhaps one of the biggest lures of the newly established Kenneth Branagh Theatre Company and its year-long residency at the Garrick Theatre is the return of Dame Judi Dench to the stage, playing Paulina in their opening production of The Winter’s Tale. One of the pre-eminent Shakespeareans of this or any age, the run largely sold out in advance proving the astute business sense but with Branagh and Rob Ashford co-directing this oft-described problem play, does it make artistic sense?

And I’m not 100% sure that it does, this doesn’t feel like a production that one will remember as a classic of our time. It is undoubtedly a difficult play to mount, the chilly stateliness of the first act’s Sicilia contrasting strongly with the permissive post-interval (and 16 years hence) Bohemia and with a rambling plot full of statuesque tragicomedy, it’s a hard one to love. Branagh and Ashford keep things more or less traditional, and of course excellently spoken, but rarely soul-stirringly good.

Branagh’s Leontes, King of Sicilia, treasures the friendship of Polixenes, King of Bohemia, but his distrustful nature gets the better of him when he begins to suspect that his heavily pregnant wife Hermione has been getting too friendly with him. Casting rough contemporaries Hadley Fraser and Miranda Raison offers one potential reason for this as they skip off skating together and roots Leontes’ irrational jealousy in a place of insecurity. 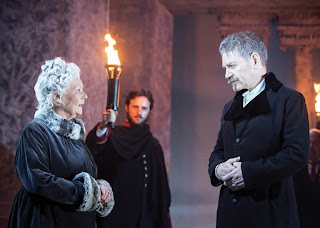 But it does remain irrational, we never really understand why he pursues his loved ones with such terrible vengeance and as Branagh dials up the histrionics, it is increasingly less incumbent upon us to care. Surrounded by Michael Pennington’s Antigonus, John Shrapnel’s Camillo and Dench’s Paulina, the verse has never sounded so mellifluously meticulous but for me, sitting way back in the rear stalls in the not-even-worth £15 cheap seats, there was a crucial lack of emotional engagement.

So by the time the austere Edwardian aesthetic of Christopher Oram’s set is overturned for the pastoral pleasures of a gypsy-influenced Bohemia and it’s the turn of the next generation of these royal frenemies to cavort (albeit not knowing who the other is), tolerance is severely tested by numerous song and dance numbers. And as Perdita and Florizel, love’s young dream and the potential of redemption personified, Jessie Buckley and Tom Bateman are both anaemically underpowered.

The final flip back to Sicilia contrives to wrap everything up in the neatest of bows, and thankfully reintroduces Dench to the stage, but I remained largely unmoved. A final flourish, designed to be a tear-jerker, steals shamelessly from Propeller’s devastating interpretation of the play and is completely unearned here, the bear is a let-down, the whole thing is all just a bit staid, the joy of hearing Dench’s consummate mastery of the verse aside.