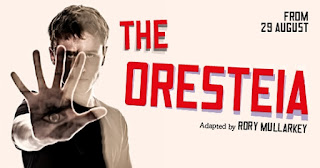 “Why must we go over and over the woes of the past?”

There’s something a little unfortunate about labelling your version of Aeschylus’ The Oresteia as “a radical reinvention” when Robert Icke’s extraordinary reinterpretation of the same source material for the Almeida has now successfully transferred to the West End. Nevertheless, Rory Mullarkey’s adaptation for Shakespeare’s Globe also emerges as something rather arresting, not least in director Adele Thomas’ canny use of creatives pushing well outside the visual (and aural) aesthetic normally associated with this venue. 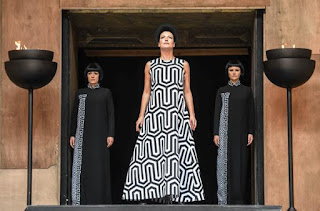 Hannah Clark’s design pulls on a wide range of influences to provide a wealth of striking images – niche cinema like Angelopolous’ The Travelling Players (the almost shifty looking Chorus) and Jodorowsky’s Holy Mountain (Clytemnestra’s magnificent posturing) mix with contemporary security uniforms (the opening messenger) and traditional Greek costumery as we know it (Agamemnon’s battle-dress). Along with Mira Calix’s diverse (including electronics) score, it’s an eclectic mix to be sure but one that pays off to create an out-of-time strangeness which really suits the production.
Mullarkey’s textual adaptation is also an unwieldly collation of disparate elements, poetic rhythm slips into modern-day colloquialisms, epic speeches slides into operatic sung passages. The shifts may be a little jarring at times but again the cumulative effect is rather impressive. The three acts follow the woes of the House of Atreus – Agamemnon sees the war veteran suffer at the vengeful hands of his wife Clytemnestra for sacrificing their daughter, The Libation Bearers sees her suffer at the hands of her son for killing his dad and The Eumenides pops him on trial and established trial by jury, as you do. 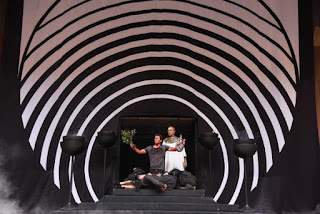 It’s a strong telling of the story but with little that was revelatory for me. Where Icke succeeded for me was in placing Iphigenia’s murder at the heart of it all, with the toxicity of everyone’s grief spilling from that point. Here, Katy Stephens’ wonderfully wild-eyed mother is given no such backstory, she’s right in there topping George Irving as Agamemnon and Naana Agyei-Ampadu’s powerfully voiced Cassandra and likewise Joel McCormack’s Orestes returning the favour in part two (after some strange Thriller video-influenced moments) – the mirroring of their bloody actions is cleverly done too.

The final part loses a little of the driving momentum, Branka Katic’s sonorous voice as Athena is beguiling but the overall feel of the trial is a little muted (the jury for example lack impact, especially compared to the excellently creepy three-faced masks that have come before) and disconnected. But by the time the priapic wonders of the final parade commerce, the quality of mercy advocated by the goddess kicks in and one can appreciate one of the more visually stunning shows of the year.