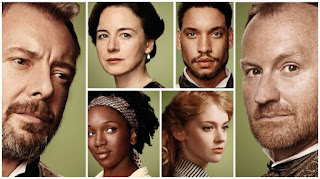 “You simply can’t just jump on the back of a cow!

Patrick Marber: Hi, can I speak to Rufus please
National Theatre: Who is this?
PM: Patrick Marber
NT: Oh I remember you, you used to write plays…
PM: I still do. In fact I’ve got a new one I’d like you guys to put on, and an adaptation too
NT: Great news, we’ll put the new play on in the Dorfman, it’ll be fab
PM: And I’ve done an adaptation of Turgenev’s A Month in the Country too
NT: The new play will be fine thanks
PM: They’re a set. You have to take both.
NT: Ah they’re interlinked are they?
PM: No, I want you to accept both
NT: Oh…
PM: And I want to direct the Turgenev
NT: Riiight
PM: I’ve loads of great ideas. The actors can sit around the edges of the stage on chairs, and the stagehands will be visible.
NT: It sounds a bit Brechtian
PM: No it’s my idea. It’s Marberish
Marberesque
Marberonian
NT: How Marbellous…
PM: And there’ll be a live pianist onstage too, all the way through.
NT: Won’t he get bored?
PM: No it’ll be fine. Honest.
NT: What’s it about?
PM: Rich bored nineteenth century Russians. He inspired Chekhov you know.
NT: You don’t say…
PM: But this is my version, it’s got a new title and everything – Three Days in the Country
NT: I see what you've done there. Any thoughts about design?
PM: Think IKEA showroom but weird.
NT: We can do that for sure
PM: I want raspberries, and kites too
NT: Sounds like it could be getting a bit expensive
PM: Oh don’t worry, Sonia Friedman Productions are on board
NT: Oh really? Why’s that then?
PM: All will be revealed in the future (I assume…)
NT: Is it a comedy?
PM: I’m not sure, we’ll have to see. And you know what NT audiences are like, they’ll laugh at anything if they’re in a good mood.
NT: We’ll cast it with people like Mark Gatiss and John Simm so they’ll just be grateful
PM: Sounds like a plan. And get someone good in there too, like Amanda Drew, she’ll be able to get the first act through its weaker moments.
NT: Good idea.
PM: I’ve got a theatre blogger friend who’ll appreciate #sexyOberon in a beard in there too
NT: #sexyOberon?
PM: Yes, #sexyOberon
NT: Ok then, we’ll have Rufus give you a call back.

Running time: 2 hours 30 minutes (with interval)
Booking until 21st October
NB: I was inspired by an earlier review in a similar format but for the life of me I can't remember who did it or what about so credit will have to remain vague