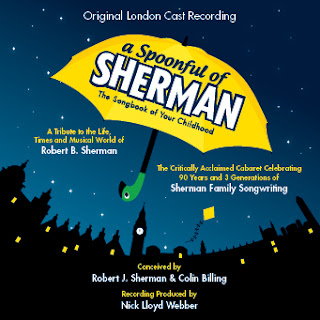 It’s quite something when the highlight of a show that includes excerpts from such perennial classics as Mary Poppins, Chitty Chitty Bang Bang and The Jungle Book ends up being a pair of songs from a film that comparatively few would have heard of - The Slipper and the Rose. But such is the depth of song-writing talent in the three generations of the Sherman family celebrated in A Spoonful of Sugar, the Original London Cast Recording of which has just been released by SimG Records.

From famed Tin Pan Alley composer Al Sherman to his sons Robert and Richard who became the most successful song-writing partnership in the history of Hollywood through to Robert’s son Robbie, an established writer in his own right, this revue covers nearly a century of popular song-writing by one family and the astonishing breadth of the musical legacy that they have left, and are still leaving, behind – this cabaret was indeed created by Robbie himself.

Its debut delighted audiences at the St James Theatre in April 2014 and this recording is a superb companion. Featuring the original quartet of performers - Emma Williams, Charlotte Wakefield, Stuart Matthew Price and Greg Castiglioni – and the beautiful piano arrangements and playing of co-creator Colin Billing, it’s a musical odyssey that sails proudly in a sea of nostalgia yet remains clear-sighted enough to introduce these songs anew through the personal touch of Robbie Sherman’s linking narration.

So even if these songs are hugely familiar to you, this soundtrack offers the chance to view and hear them through a new lens – ‘Feed The Birds’ is a crisp beauty in Williams’ eloquent delivery, Price is hauntingly beautiful in ‘Hushabye Mountain’ and Castiglioni’s genial charm comes to the fore in ‘I Wanna Be Like You’, to pick just a few of the stone cold classics that make up this selection. There’s a large number of full company medleys too which are equally effective in bringing a freshness and invention to so many of these tunes.

But for me, it is the pair of songs from the musical adaptation of Cinderella that is The Slipper and the Rose that shine through as hidden gems. Williams’ pristine vocals are a perfect match for the bubbling joy of ‘Suddenly It Happens’ And there’s a performance of devastating, plaintive simplicity from Charlotte Wakefield on ‘Tell Him Anything’, its yearning tenderness so powerfully touching and beautifully contemporary in this rendering. A genuine testament to the unbelievable quality of the Sherman song-writing genius.