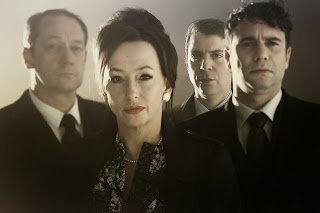 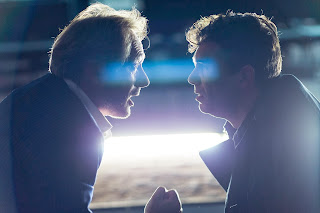 For those new to Eugene O’Neill’s masterpiece Lange Dagreis Naar De Nacht / Long Day’s Journey Into Night, the opening image of Ivo van Hove’s masterly adaptation for Toneelgroep Amsterdam sets the tone accurately as a family drama as the four Tyrones - mother, father, two sons - embrace. But it’s a disarming sequence too, as the next three hours sees this nuclear family unit exploded as drug addiction, terminal disease, alcohol abuse and the bitter frustrations of past and present tear them apart. And they each float around the vast stage of their modern home like isolated atoms, the mind is drawn back to that opening image, reminding of the tragedy of the disintegration in front of us.

And though Jan Versweyveld’s beautiful set stretches across a wide and deep space with just the minimalist touches of design, van Hove’s production swells to fill it to the brim with the bruised pain, aching recriminations and crushed dreams of these four who are lost in this world, their inescapable own little worlds in fact, that simultaneously keep them trapped here yet unable to interact in a meaningful way. That opening embrace is inspired by Mary’s return from treatment for her scarcely acknowledged morphine addiction but over the course of the day that follows, the ‘long day’ of the title, her return provokes the subtlest of shifts in their collective self-delusion.

It’s a favourite play and Toneelgroep Amsterdam have to rank as one of the most exciting theatre companies I’ve ever seen (both were huge factors in deciding to go to Amsterdam) so expectation was certainly high but I can honestly say it was genuinely excellent. The sheer intensity of the production was just magnificent to behold, the depth of emotion underpinning the performances rendering the surtitles unnecessary as it was often enough just to get completely lost in the moment with the actors, feeling the emotional connection that transcended language through the medium of theatre, and embracing van Hove’s particular affinity for O’Neill. 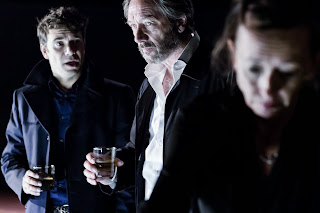 His work on distilling the essence of these characters and allowing his actors to then take their own spin on their particular demons has a captivating allure. The different styles jar ever so slightly, fit with a little awkwardness, suggesting perfectly the way in which the alignment of this family has been damaged, none of them are able to come from the same place. Marieke Heebink’s Mary – the one able to escape even if only up the giant spiral staircase into the opiated fug she craves – is sensational, a genuine matriarch even as she crumbles and Gijs Scholten van Aschat’s James is a powerfully tyrannical performance, fiddling even as Rome burns, his stinginess utterly misguided. 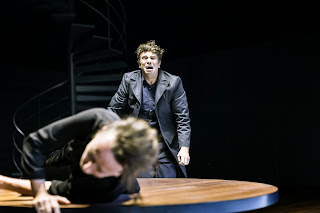 But for me, the acting honours went to the two younger men. Ramsey Nasr’s embittered older brother James Jr delivering a masterclass in drunk acting (so incredibly difficult to do well) and Roeland Fernhout’s sickly Edmund, whose severe tuberculosis is something else barely acknowledged by the family, is simply heart-breaking in the anguish he uncovers as he encounters his father and then his brother, desperate for the answers he knows will never come. The cumulative effect of the whole production was devastating, a slow-burner of the greatest intensity and shell-shocking in its power. Completely worth the trip!