"Most dangerously you have with him prevailed"

This is truly a Coriolanus for our times. Josie Rourke’s intimate chamber production for her Donmar Warehouse made ripples by casting Tom Hiddleston in the title role, a rare return to the stage for an actor now catapulted into Hollywood’s hotlist, but in so many other ways, it is an intelligent reading of the text that subtly recasts Shakespeare’s tragedy into something if not exactly relatable, then certainly recognisable. 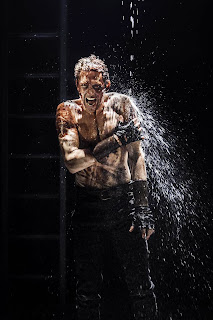 Roman general Coriolanus is viciously successful on the battlefield but when he is urged to move into a political career, he faces a whole new set of challenges. Enormous pressure from his domineering mother that has stunted his lifelong emotional growth, a disdain for the very same ‘great unwashed’ whose votes he needs, and an establishment gunning for him from the word go. Rourke ensures huge clarity in her adaptation of this most brutal of tragedies which proves most compelling.

Beautifully spoken with a seemingly effortless ease, Hiddleston’s undeniable upper-class-ness makes him the ideal patrician antihero – a blithely arrogant, if effective, soldier turning into an ill-suited politico whose views on the ‘real world’ call to mind something of the current government’s rhetoric. And of course he’s pushed into it by his mother, a jaw-droppingly excellent Deborah Findlay, whose Volumnia scorches the earth before her with the heat of her militaristic fervour.

The manipulative tribunes Brutus and a gender-swapped Sicinius, here renamed Sicinia, personify the hypocrisy of the sceptical political classes, Elliot Levey and Helen Schlesinger capturing perfectly their sly machinations and slippery doublespeak. Peter de Jersey and Mark Gatiss are both strong as Coriolanus’ allies and in another piece of timely casting, Borgen’s Birgitte Hjort Sørensen deals gracefully with the thankless role of his wife Virgilia, making up for her lack of dialogue with the most expressive of faces.

Graffiti that scrawls itself on the back wall digitally, pulsing shards of electronic music and exploding fireballs keep the kinetic energy of the piece almost distractingly high in the first half, but it is in the second act when Coriolanus meets again with his arch-enemy Aufidius - a magnificently homoerotic northern-accented, bearded Hadley Fraser - in brand new circumstances, shattering the status quo, that the production actually ignites into intense perfection. The devastating quietness of these later scenes, stripped free of make-up both on face and stage highlights the genuine tragedy that comes to pass.

Running time: 2 hours 40 minutes (with interval)
Photo: Johan Persson
Booking until 8th February, and will be broadcast in cinemas on 30th January as part of NT Live