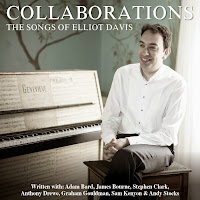 Elliot Davis may be best known to fans of musical theatre as the co-writer of Loserville but his career has stretched over several musicals and other projects which have seen him collaborate with a wide range of songwriters and his CD Collaborations – The Songs of Elliot Davis cherry-picks a collection of thirteen songs from his back catalogue. Excerpts from musicals sit alongside out-and-out pop songs and are performed by a cracking cast of West End favourites, including Julie Atherton, Michael Xavier and Scarlett Strallen, all in aid of Teenager Cancer Trust.

It is undoubtedly an eclectic mix and on first listen, its sheer diversity may seem a little disarming. Two songs written with lyricist Anthony Drewe capture this perfectly – Kirsty Hoiles’ understated rendition of Still is a thing of shimmering beauty yet the bubbly 24 7, performed by the trio of Caroline Sheen, Scarlett Strallen and Melissa Jacques, sounds like it is aiming to become a gay club classic with its relentlessly catchy hook. But the songs definitely bear replaying, lyrical ingenuity mixes with musical dexterity and it is a potent blend.

In some cases, song and singer come together to achieve something special. The Rat Pack swing of And So It Was is delivered just right by Paul Baker, the bittersweetly reflective Miss The Future with lyrics by Sam Kenyon is perfectly matched up with the über-talented Julie Atherton, and Michael Xavier’s restrained vocal on The Coldest Of Men is most moving, capturing the aching poetry of Stephen Clark’s words.

It’s not all quite so successful though - Carley Stenson’s driving emotion on Antidote To Love is a little undermined by some oddly pitched backing vocals and though Davis’ creative relationship with former Busted star James Bourne is clearly a fruitful one, having him sing three songs feels like a missed opportunity to demonstrate at least some of the theatrical potential of their co-writes.

But there’s so much variety on Collaborations that it is hard to imagine one wouldn’t be able to find something one likes and there is definitely much to enjoy on this album. The album is released on 23rd September both physically and on iTunes and Elliot Davis will be celebrating the release on 22nd September by playing two shows at the St James Theatre with a whole host of guests.