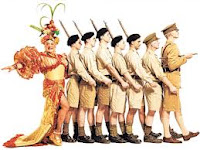 “How many sorts of people there are”

Well what an unexpected thing Privates on Parade turned out to be. Not knowing anything about it in advance meant it was full of surprises: the ‘play with songs’ moniker shouldn’t disguise the fact that it is closer to a musical than a play, and it very much needs to be treated as the period piece that it is. On the face of it, its ribald campery and racial stereotyping could be something of an affront, a relic of an old-fashioned past with old-fashioned attitudes, but to merely dismiss it as dated and offensive is to miss the wider points of Peter Nichols’ 1977 play and the nuances of Michael Grandage’s production, first seen at the Donmar in 2001.(FYI: this was a preview performance.)

The play opens the Michael Grandage residency at the Noël Coward theatre, a season of five star-studded plays – Simon Russell Beale is the marquee name here - with a new pricing model aiming for greater affordability for drama in the West End. It’s set in the fictional Song and Dance Unit South East Asia (SADUESA), a British army entertainment corps stationed there at the time of the Malayan Emergency in the aftermath of the Second World War, and follows this troupe of military entertainers as they tour their act through the hostile jungle of the Malayan peninsula. So against the near-oblivious flamboyance of the Marlene Dietrich covers, cabaret turns and jaunty full ensemble numbers, is a backdrop of long-simmering native discontent and explosive violence for which they are ill-prepared.

So once one has become attuned to the tone of the production and established that there’s a hugely warm humanity at work which means we’re laughing with and not at what is being said on stage. It helps that it is anchored by a sensational performance by Russell Beale as Acting Captain Terri Dennis, the director and drag queen lead of the show and a homosexual thoroughly of the old school. Feminising everyone’s names, tripping off single and double entendres with every blink of his mascaraed lashes, he is clearly having a ball and his enthusiasm is infectious, especially as he never lets us forget the man beneath the makeup, there’s love and tenderness in there alongside a sly defiance against society’s entrenched homophobia.

Likewise with the fresh young privates, the raucous comedy and buck-naked antics (there is a good airing of the privates’ privates) are highly enjoyable, but given considerable extra heft by the context in which they are happening – we see as much of their life off the stage as on it, the shifting dynamics of power and sex, of love and control. So John Marquez’s ever-swearing Brummie Len constructs a beautifully tender relationship with Harry Hepple’s Charles that flies entirely in the face of the reality waiting for him at home; the naïve new arrival Steven Flowers gains life experience of all kinds, especially at the hands of mixed-race Sylvia – a lithe Sophiya Haque – Joseph Timms depicting this blooming of Flowers with a wide-eyed joy; and Angus Wright’s Major Flack is just superb, a bastion of true awkward old-school officer-class Englishness (witness him explaining the facts of life to Flowers, in French) which deftly suggests the decline of Empire.

Denis King’s music revels in its playfulness, though I’m personally not a fan of the way the use of songs switches throughout the show – the performance numbers that the troupe deliver, such as Dietrich and Carmen Miranda take-offs, are mixed with narrative songs in true musical theatre fashion which confuses the tone a little, though Nichols’ lyrics are always cleverly executed to say much more than they initially appear to. Christopher Oram’s simple design looks excellent under Paule Constable’s astute lighting and contains a number of effective flourishes (loved the rainbow effect), not least a stirring final image that challenges and provokes as much as anything that has gone before.

Privates on Parade may not be to everyone’s tastes, but I genuinely believe to just label it as a dated anachronism is an oversight which denies so much of the complexity of what is actually contained within. On an utterly shallow level, I’m delighted I’ve seen all that I ever wanted to of Sam Swainsbury (I’m referring to his singing ability of course…) but more seriously, there’s something refreshing about a production that doesn’t seek to contextualise or reconcile attitudes from a different time but just presents them in all their unreconstructed glory with a wit and a warmth that I found to be irresistible.


Programme cost: £4
Booking until 2nd March
Note: I sat in my £10 seat at the back of the Royal Circle (which I’ll be revisiting for all the other MDC productions) and can highly recommend it as an excellent bargain – if they’ve all sold out online, some of the dayseats are apparently there too