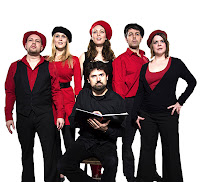 “I’ve seen all sorts of things in pub theatres...”

Tonight saw a very special version of Showstopper! The Improvised Musical, currently playing Sundays, Mondays and Tuesdays at Islington’s King’s Head Theatre, as it featured none other than fairy godfathers and inspiration to theatre bloggers across the nation, the West End Whingers as special guests. As a critics show, it took a slightly different format: whereas normally the audience are encouraged to shout out scenarios, musical styles and plot developments at the beginning and a show is improvised from there by the ensemble, here our invitees had been asked to write a review of a play from their imagination that does not currently exist and so that was the show that was then developed put on by the team, who were blissfully unaware of what was coming their way.

The show was Dametastick!! a tale of two theatrical divas, narcoleptic Andromeda Dench and Philomena Smith with a wooden leg, old drama school chums from the Rah-Dah estranged after marrying the same man, though at different times but now both in the twilight of their careers auditioning for the same part in The Grapes of Froth, a production being put on a pub theatre with pretensions of becoming an opera house and directed by the man who had been married to them both. Highly silly, highly amusing and enlivened even further by the requirements of the plot, including a tap routine whilst eating cream crackers, a grape-treading number that involved yodelling and a coup de théâtre at the finale which was so amazing it couldn’t even be mentioned until the very moment it came to pass. At least those were the things I could remember, the Whingers really packed a lot into their allotted 80 minutes!

I’m a big fan of Showstopper! having seen it three times before and I never grow tired of it as it really does prove to be different every time yet always extremely funny. There’s a rotating team of twelve performers, there tends to be six at any one show, with one extra marshalling the fun, in this case it was Sean McCann directing, interjecting and increasing the madness. This time round, Ruth Bratt (far right on the picture) was just brilliant: I’ve been lucky enough to see her every time I’ve seen the show and she is probably my favorite performer out of all of them, seemingly always on the verge of corpsing yet delivering laughs, put-downs, ripostes with consummate ease. As Philomena, her best moment was the Sondheim take-off Park Benches and Balloons which practically redefined the balloon metaphor for the modern age. Pippa Evans (second left)was also excellent as Andromeda, her biggest rival, with the unenviable task of prat-falling several times as her narcolepsy took hold but doing it so very well and her big number, Worcestershire (The Source of Me) (geddit?!) sung in a Lloyd-Webber stylee was also great fun. Adam Meggido (far left) gave excellent support with his mime antics, Sarah-Louise Young and Andrew Pugsley’s inexplicably French producers were amusing and Oliver Senton as the magic man between our two divas gave good smoulder.

Whilst much of the humour comes from the material itself (watching five people stuff their faces with crackers and pretending to tap dance is naturally hysterical), it is the random tangents that shoot off that cause the biggest laughs. A wistful song depicting the central love triangle took a bizarrely surreal turn as the lyrics turned to talk of ‘breasts of jam’ and ‘arms of ham’ (I think!) adding to the mayhem and general hilarity. And it is truly remarkable how in tune with each other the ensemble is, able to pick up on a line or a refrain and spin out harmonies and ad libs, again though it is delicious on the rare occasions when one performer moves a little too quickly for the other and loses them and quick recoveries become necessary. But as well as the actors, the musicians, under Duncan Walsh-Atkins’ musical direction and the lighting guys deserve a mention to in responding so well and so ingeniously quickly (especially with the magic trick!) to the fast unfolding events on the stage. Altogether, the whole team creates something special which always feels perfectly fresh and genuinely interactive, they're obviously having a ball on stage but it is so inclusive that it is impossible not to be swept away with them.

If one is being picky, then one might say that this didn’t quite have the same free-flowing looseness and natural improvisation that previous Showstoppers I’ve seen have had, perhaps due to the sheer amount of material the Whingers had put forth but this is a teeny minor gripe in what was a hugely enjoyable evening. And though it was highly illuminating to see the kind of play the West End Whingers dream of seeing, (I wouldn’t put it past them to try and get this onto the stage themselves!), the fun for future audiences is in creating their own shows with this supremely talented and inventive ensemble.