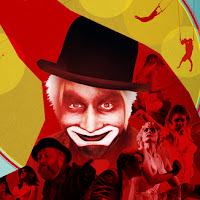 “He will have to combine the rough with the smooth;
Only then will he find his Faustian groove”
Vesturport are an Icelandic theatre company whose innovative approach to theatre has seen them involve actors variously underwater, climbing up walls and clambering across ceilings and performing without makeup. Their new play, a free interpretation of Goethe’s Faust, is a co-production with Reykjavík City Theatre and has been chosen as one of the first plays in the Young Vic’s 40th anniversary season.
Starting off in an old people’s home at Christmastime and an attempted suicide by Jóhann, a gruff actor who after quite some persuasion begins to read the story of the one major role he has never played, Faust. It then riffs off on the Faust story as we know it, taking us on something of an epic journey, somewhat recognisable but at the same time completely different. This ends up as less an exercise in coherent, emotive storytelling than an exhilarating, acrobatics-filled rollercoaster of a production, set to music by Nick Cave and Warren Ellis (one of the Bad Seeds) that uses the space of the Young Vic like nothing I’ve seen before.
Director Gísli Örn Garðarsson’s reinvention has placed a huge net above the seats allowing for a highly acrobatic interpretation of the story to take place all around us and often above our heads. It is highly imaginative and a breathtakingly well-executed exercise in physical theatre with beautiful moments like the snow falling out back and silly moments with the formation wheelchair dancing. It was less successful to be frank at telling the story of the play but one rather gets the impression that it doesn’t concern the company too much!
Þorsteinn Gunnarsson as the Faustian character, Jóhann, was excellent, mining a strong emotional sincerity and the only character really able to do so. Björn Hlynur Haraldsson as the Mephisto type with Nína Dögg Filippusdóttir and Rúnar Freyr Gíslason as his devilish companions were great value for money with their highly acrobatic and stylised turns; Gíslason also doing well as Faust’s younger self with a great chemistry with Unnur Ösp Stefánsdóttir’s appealing Greta, the woman whom Faust/Jóhann desires. I also liked Víkingur Kristjánsson's manly presence and Svava Björg Örlygsdóttir as a dotty inmate in the old people’s home with a nifty turn on the electric guitar too, indeed there were no bad performances, but perhaps a little too much mugging and reliance on funny walks.
Axel Jóhannesson’s set is relatively simple, allowing for the actors’ acrobatics to take centre stage, up the walls and above our heads with a few hidden surprises popping up now and again to much amusement. Sadly a technical malfunction resulted in much of the grand finale being thrown off-kilter with lights and music going askew and a stagehand trying to fix the pulley, thereby distracting hugely from the dramatic events. Nick Cave and Warren Ellis’ score is good and nicely atmospheric, but I was a little disappointed having been anticipating songs (I think I thought this was actually a musical) and there’s only one cod-glam-rock number, aside from the endless versions of Last Christmas that play in the old folks’ home.
So a mostly insane and enjoyable evening, albeit not one with much emotional engagement, but an excitingly different piece of programming from the Young Vic, which combined with the introduction at last of numbered seats, makes for a great start to their anniversary season.
Running time: 2 hours 10 minutes (with interval) (this was a late preview so unlikely to change too much)
Programme cost: £3
Booking until 30th October
Note: it is stuffed full of strong, grotesque imagery that is really not suitable for young children, and there’s a brief moment of bare-breastedness. Also, it is extremely, extremely loud at times.