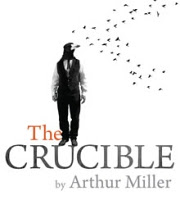 “I will come to you in the black of some terrible night and I will bring a pointy reckoning that will shudder you”
It really is a good time to be an Arthur Miller fan in London: All My Sons is receiving rave reviews at the Apollo Theatre and now you can see The Crucible at the Regent’s Park Open Air Theatre in a chilling new production of a play.
The Puritans of Salem, Massachusetts are shocked when a group of their young girls are caught dancing in the woods and one of them falls into a coma. Accusations of witchcraft soon start to fly and as the hysteria mounts and a full-blown witch-hunt ensues, vendettas about land and money, and also of the heart, are pursued sub rosa as events snowball to a shockingly brutal conclusion. The struggle between truth and righteousness, between protecting self-interest and rising to the need of the greater good, is personified in the Proctor family, John and Elizabeth.
Although written at the time of the McCarthyite anti-American witch-hunts, much of what it concerns struck me as so relevant to us today. The rampant intolerance, the "you're either with us or against us" mentality, the dangers of social groups coming together to defend their interests against all others, even the struggles of John and Elizabeth to communicate effectively as husband and wife, all remain pertinent even as it is presented to us in seventeenth century dress.
It helps of course that it has been cast extremely well, Patrick O’Kane’s wild-haired John Proctor suggests some of Christopher Ecclestone’s level of intensity, fiercely independent but plagued by the conflicting desires to save his wife but also to do the right thing, finally finding serenity in his ultimate decision. Emma Cunniffe is super, playing Goodie Proctor with a tightly coiled restraint marked by sudden bursts of passion or grief that are all the more effective for their unexpectedness And Bettrys Jones as Mary Warren, the Proctors’ maid whose testimony could sway the outcome of the entire accusation of witchcraft is also excellent with a convincing performance.
The company of girls from the East15 acting school do a great job as vengeful observers throughout the majority of the play, sat around the edge of the stage their combined influence is quite chilling, as they turn and point to the individual women who are accused, chanting names in a very sinister manner and in the courtroom scene when they fall under the ‘influence’ of Mary Warren, their collective hysteria is genuinely disturbing. Led by the merciless Abigail Williams, played here with a vicious stone-facedness by Emily Taaffe, I’m quite glad I saw it in the daytime as they’re not girls you’d want to meet in the dark!
There is a real sense of the enormity of what is happening and the creeping realisation that things are going too far, explicitly through Philip Cumbus’ appalled Reverend Hale but also displayed brilliantly by two of the more minor supporting roles. Paul Kemp as Ezekiel Cheever and Gary Milner as Marshall Herrick both did excellently in recognising the horror of what they were complicit in doing but also the futility of trying to stop it, painfully exemplified through the physical deterioration wrought on Susan Engel’s Rebecca Nurse. It’s also evident even in Taaffe’s anguish as Proctor is led to prison, her twisted games have finally gone too far.
The staging is simple, the floor is actually the front wall of a house and little touches like a bed (which ruined my sightline for the first scene) and a cauldron rise up periodically. Striving for historical accuracy with the multitude of accents that would have still persisted in the still relatively newly established settlement is a step I would have avoided as it is really quite distracting for the larger part of the first half, you just have no idea what each new character is going to sound like. And a couple of the townsmen over-egged their accusatory scenes, a little more subtlety might not have gone amiss there.
A friend of mine went the night before and after comparing notes, we agreed that you should definitely go and see this at night-time. The flaming torches sound perfect and although the atmosphere was wonderfully tense even in the blazing sunshine of the matinee, it can only be enhanced by watching this as the sun goes down. Whilst not the five-star success that is All My Sons (but then again, I don't think anything else I see this year will be), I’d definitely give this a worthy four stars and if the weather holds out for you, a lovely way to spend a warm early summer evening.
Running time: 3 hours
Programme cost: £4