Originally reviewed for The Public Reviews 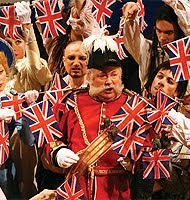 "About binomial theorem I'm teeming with a lot o' news, with many cheerful facts about the square of the hypotenuse"
The Pirates of Penzance is arguably one of Gilbert & Sullivan’s best-known works (and in my house, best-loved) and has been revived here by the Carl Rosa Opera Company as part of a national tour, starting off at the Theatre Royal Brighton. Truth be told, I love this musical: I had a video of the film version with Kevin Kline and Linda Ronstadt as a child which I used to watch endlessly and can sing along to most all the songs! This is therefore a special week for me as I'll be seeing two different versions of Pirates as the all-male production at Wilton's starts previews at the end of the week.
Probably best described as a romp, it involves a group of tender-hearted pirates in their quest to conquer the hearts of a bevy of blushing maidens, daughters of the local Major General, the efforts of the bumbling local constabulary to apprehend them, a love triangle between a former pirate’s apprentice, his old nurse-maid and one of the daughters, oh and a most ingenious paradox.

The 18-person Carl Rosa Opera Orchestra, under Martin Handley’s musical direction did a fantastic job of playing Sullivan’s memorable score and the wonderful tunes. The first half in particular of The Pirates of Penzance is blessed with an almost non-stop array of knockout numbers and the overture is just a delight as so many of these familiar songs are quickly sampled, whetting the appetite for the delights ahead of us.
And what delights. This is sung nearly perfectly by a very talented ensemble, complemented by some excellent individual performers, including two members of the original cast of Phantom of the Opera. Everyone sang well with brilliantly clear diction too, something so very necessary in getting across the full humour and cleverness of the lyrics. Rosie Ashe as pirate wench Ruth was superb, dexterously handling her exposition-heavy lyrics yet still hitting all the right comedic notes; Barry Clark’s Major General and Bruce Graham’s Police Sergeant were both nicely bumptious and Katy Batho impressed with a piercingly clear voice, hitting those top notes with a beautiful sound.
The only weak part was unfortunately with the star name, Paul Nicholas. I’m not sure if it was first night rustiness or if he was under the weather, but he was struggling vocally right from the first song. All credit must go to his Lieutenant Michael Kerry who did much of the heavy lifting in the songs and delivered the big notes and delivered such a good performance one couldn’t help but wish he’d been cast as the Pirate King.
The entire show is filled with numbers that involve large groups of cast members onstage and Peter Mulloy’s direction along with Steve Elias’ choreography is excellently realised by the cast who negotiate the steps well and in some cases, show off some brilliant routines: A Modern Major-General was a particular highlight with everyone onstage, but Oh! Better Far To Live And Die (aka I Am The Pirate King) and When A Felon’s Not Engaged In His Employment (aka A Policeman’s Lot Is Not A Happy One) were both great to look at too. (One company member needs to work on his poker face though, suffering badly from the giggles as his flag flew off its pole!)
The staging is fairly basic but effective, changing from the rock-strewn clifftops in the first half to the ruined mausoleum in the second act, and a silly but amusing sketch during the overture with a toy boat and a piece of cloth representing the sea setting the tone perfectly. The costumes however are of an excellent standard, pirates costumes and Victorian dresses alike looked both lavish and appropriate, in one case revealing as hairy a chest as I’ve seen recently.
As a big fan of this musical anyway, I loved this faithful revival which delivered on everything one would want from the production of a classic. And jam-packed full of tunes, humour and a wealth of great performances as it is, this makes a great starting point for those unfamiliar with the works of Gilbert & Sullivan too.
Running time: 2 hours 20 minutes
Programme cost: £3