Review: Anyone Can Whistle, Jermyn Street 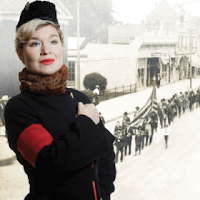 “Can’t complain about the time we’re given”
Despite Lauren Bacall telling me to just put your lips together and blow, I have never been able to whistle. Even if I could, my deaf old ears wouldn’t hear it anyway, but having seen Anyone Can Whistle at the Jermyn Street Theatre in Piccadilly, I now realise that it is symptomatic of a life of emotional constipation and sexual frigidity: eek!
For a blog named for a Stephen Sondheim lyric, I have had precious little experience in seeing his work. Tim Burton’s cinematic Sweeney Todd aside, I’ve only actually seen the recent Menier A Little Night Music so I was pleased to see a number of Sondheim works lined up for this year, which just happens to mark his 80th birthday. Later in the year we’ll have Into the Woods at the Open Air Theatre in Regents Park and Passion at the Donmar. In a couple of weeks there’s a concert on his actual birthday at the King’s Head, but first up in London is Primavera’s production of Anyone Can Whistle.


It is a “dramatisation of the contest between oppression and freedom” both on a political and a personal scale. Set in an American town in the 1930s, Cora Hooper-Hoover is a corrupt mayoress ruling over a depressed populace with the help of her crony-filled Council. Sensing the mood of the town moving against her, they set up a devious plan to hoodwink them but they fail to reckon with feisty Nurse Fay Apple and a charismatic new arrival Hapgood, yet even their good intentions are coloured with their own personal struggles, as everyone struggles with the concept of being ‘normal’.
This production finds its location in a fascist leadership, the officials are all outfitted in striking black and red Mussolini-style military outfits, instantly bringing darker overtones to this than one might have expected. The local asylum, the inhabitants of which play a big part in proceedings, is called the “Cookie Jar for the Socially Pressured” and the intimation is that most of them are actually political dissidents rather than genuinely mentally ill people, thus making the anarchic stirrings of Hapgood a stronger act of rebellion. But nor are the consequences of fighting against an oppressive hardline regime ignored, showing the futility of action without thought and thereby making the more personal story of Fay and Hapgood even more charged as the one potential escape from darkness.
Issy van Randwyck’s Mayoress Cora is a vision in scarlet, trilling like Hyacinth Bucket and prone to throwing in almost-vaudevillian dance routines with her henchmen, Leo Andrew and Karl Moffatt, which were brilliant. Ably assisted by Alistair Robins’ disturbingly unflappable Comptroller Schub, theirs was a dictatorship it almost seemed fun to be part of! Rosalie Craig’s repressed Nurse Apple takes a little time to warm up, but has great fun when incognito and her yearning delivery of the title song was just lovely. The other big song (at least that I knew) With So Little To Be Sure Of was also good, but Craig needs to make sure she is not dominated by David Ricardo-Pearce as Hapgood in order to bring out the best in this winning duet. Ricardo-Pearce was probably the best of the leads for me, with a charismatic, at times manic performance and a beautifully clear, direct singing style which is ideal for dealing with Sondheim’s lyrical dexterity: imperturbable perspicacity indeed!
Anything with good actor/musicians in it always inspires awe in me (and a tiny touch of jealousy), and when one of the instruments is a waterphone then it is hard not to get overexcited. The ensemble do extremely well in navigating the small space of the Jermyn stage sometimes with their instruments, and created a pleasing sound throughout, they were also vocally strong. The aforementioned henchman choreography was a consistently good sight to behold, but I was less keen on the ballet stylings that crept in as the inmates were being captured, this section just didn’t fit in with the rest of the show for me. Christopher Nairne’s lighting design deserves a special mention in creating incredibly effective moods throughout and the evocation of nightmarish Fascist propaganda was chillingly well realised.
I did really enjoy this: there’s something almost decadent about big musicals in small spaces when they are done as well as they are here and recently at the Union, and I find that a great pleasure. According to the programme, Anyone Can Whistle was quite the failure when it was first produced in 1964, and one can see why as it is quite a quirky little piece. But even when the story gets dark and the motivations of everyone, heroes and villains alike, remain complex, the writing and the deftness of the Tom Littler’s direction just remind us this is more like real human behaviour than we might care to imagine. Now I just need someone to teach me how to whistle!
Running time: 2 hours 20 minutes (with interval)
Programme cost: £2.50