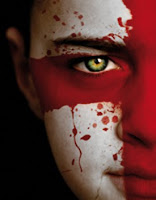 "I am glad thou canst speak speak no better english, for if thou couldst, thou wouldst find me such a plain king"
Ooh, this whingeing thing is hard to shake... After my exploits at the Adelphi on Monday, I had to take a couple of days downtime from the theatre to recover and reassess the world in the light of love having actually died a death right in front of me. To try and restore my customary mood, a trip was made to Henry V at the Southwark Playhouse. A company of seven actors act out the radically edited play, covering several characters each, using, and I quote "striking physical imagery, innovative movement sequences and direct contact with the audience" to "reimagine [this as] a life-sized board game. What could possibly go wrong?
One is given a pass along with your ticket which allocates one to either the English or the French army: this governs where one sits in the theatre and there's a little playing along too, as we're exhorted to rise when the King first arrives and it's all jolly fun initially. The floor is covered with a large scale map of England and France, and the seating is arranged around all four sides, creating the stage, or game-board in the middle. This is where Shakespeare's play of fast-maturing Henry V's attempts to conquer France, culminating in the famous battle of Agincourt, is told by our players in a really quite bizarre fashion.
They arrive on stage all dressed in school gym wear, white shirts, shorts and plimsolls and some lovely yellow bumbags (or fanny packs for any American readers) and wearing either blue or red vests with their characters names emblazoned on the back. As they shift from character to character, they change vests to ones with different names on, all stashed away in the bumbags, a conceit which didn't really work for me.  We're then subjected to the introduction of the 'innovations' which allegedly help to tell the story (although I suspect that every single one of them simply delayed the story-telling).

For the most part though, these innovations just don't work. Chorus constantly rolls a dice, the outcome of which has no impact on anything whatsoever, Henry juggles, audience members were twice beckoned onto the stage to (awkwardly) deliver lines. Rather tellingly, hardly any of these things reappeared in the second half, perhaps an indication of the experimental style not being fully believed in by all concerned.
As for 'innovative movement sequences', that is stretching it somewhat. There's nothing here that hasn't been seen before, not least in an Olivia Newton-John video which Henry's red headband and tight white polo-shirt kept reminding me of: the endless jogging on the spot representing the army moving forward soon grew wearisome as nothing else was happening at the same time, the story wasn't being advanced at all and it wasn't always abindantly clear what they were doing or where they were going. By the time they got their pac-a-macs out of the bumbags, I was ready for deserting this army.
There's no real sense of seriousness to the whole proceedings, exemplified by the use of tiny fluorescent toy guns, meaning scenes like the execution of Bardolph stick out like a sore thumb: if war is just a game, as they seem to be telling us, then I'd hate to play Monopoly with them. And in trivialising its subject matter such, it makes it extremely hard to give two figs about what is happening or who is going to win.
But it is also weak in the basics as well. In this echoey chamber with the frequent rumblings of nearby trains, care always needs to be taken that speech can be heard, an attention to detail which can be partly rectified with some notes to the actors to speak up and more clearly, but the staging means that many of the scenes played in corners were unintelligible through poor blocking, on top of the volume issues. Only Anna McSweeney's Chorus seemed to have an understanding of how to deliver her lines appropriately in this venue. And the less said about the acting, the better. Most are too busy delivering whichever annoying little trick is next or concentrating on getting their vests on the right way round to give any real performance of note.
There's no doubting the enthusiasm of all involved here, but I found little to be able to say that I could recommend this to anyone. An interesting concept alone is not enough when trying to re-envision Shakespeare, it needs to be well-thought-through and executed throughout, but also backed up by clear verse-reading and a strong sense of story-telling, none of which were sadly in evidence here: one ends up feeling there's a real sense of '(poor) jack of all trades, master of none'.
Running time: 2 hours with an interval (despite 90 minutes being quoted on website)
Programme cost: just a double-sided piece of paper with cast/creative biogs but it is free
Note: the seating around the auditorium is in two rows, the front row is chairs and benches, but the second row is high, narrow stools. You can lean against the wall but you might want to get into the theatre sharpish in order to bag yourself a proper seat.