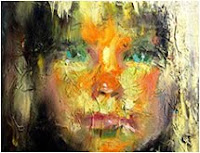 The Early Bird at the Finborough should probably come with some kind of health warning, this is some seriously disturbing dark stuff. With a missing child at the centre of this play though, one should not really be expecting an easy time of it. Performed by real-life husband and wife Alex Palmer and Catherine Cusack (half-sister to Sinéad, Niamh and Sorcha and more excitingly, played Carmel the psycho nurse from Corrie!) as Jack and Debbie, the couple struggling to deal with the disappearance of their daughter Kimberley one morning on the way to school. We then follow them as they try and recreate the events of that morning but the aftermath reveals the cracks below the surface and things become increasingly, incredibly creepy.

The design by takis is sensational: the actors are enclosed in a clear perspex cube and surrounded by piles of ash, with just a toy chest inside. Lit harshly from fluorescent tubes below, it is clear they are trapped, both physically and emotionally in their horrific experience, but as the seats are arranged around the box in the round, it is clear that we the audience are also trapped, with nowhere to hide from the unfolding action and the unflinching, coruscating stares of the actors.
Leo Butler's language is dark and modern, making much use of echoing phrases and repeated sections as we discover new and changing meanings as the action progresses, but it must be said that even with just a 70 minute running time, some of the repetition did become a little bit wearing. This is in part due to the opaqueness of the writing. We are constantly having our understanding questioned with some really clever tricks pulling you one way or the other, but the nightmarish, almost hallucinatory, twists and turns means that one is still left questioning at the end of the play. The vagueness leaves one feeling somewhat unfulfilled although makes for very interesting post-show discussion.
Cusack and Palmer both give strong, impassioned performances, filled with anger they both convince, in the quieter moments there's perhaps less of an emotional connecton between them, and between them and the audience, but this is as much to do with the above-mentioned vagueness: it's hard to care for someone when you don't know if they exist or what is really going on. Just finally, there are scenes where they both double up as their daughter, these are amongst the most chilling things I have ever seen. The vocal effect alone was creepy enough, but the physical performances in playing Kimberley, especially by Palmer, is still giving me the chills thinking about it now.
Whilst by no means perfect, this is such an interesting production with much to commend it, and with limited seating inside, I rather suspect it will sell out soon, so book now. But be warned, uncompromising and brutal, this is not theatre for the faint-hearted!