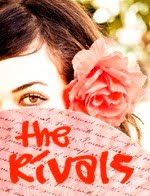 "If I reprehend anything in this world, it is the use of my oracular tongue, and a nice derangement of epitaphs!"

Taking up residence at the Southwark Playhouse is this new production of Richard Sheridan's The Rivals, mixing music and dance with a very high calibre cast to create a fresh new look at this well-known comedy. Set in eighteenth century Bath, it follows the efforts of the meddlesome Mrs Malaprop to marry off her niece Lydia Languish, who has romantic designs of her own, but with an array of suitors, some of whom are not all who they seem, the scene is set for a plethora of romantic capers.

I loved the opening: the cast trickle onto the stage and chat away to the audience as if we're all here for a ball, then up strikes the music and there's a wickedly subversive choice of songs for an opening dance number which set the tone for this mischievous little production. There's a real convivial atmosphere throughout, with plenty of fourth-wall-breaking going on (be warned if you're on the front row!) and the cast play up to the intimacy of the venue with a strong conversational style.

It's led by a trio of high-profile female performances. The stunningly beautiful Charity Wakefield as a playful Lydia is spritely good fun and charmingly engaging and Ella Smith as Julia does well with the lightest of touches on some very wordy scenes and showing off a melodious voice and some flute-playing thrown in for good measure. But it is Celia Imrie as Mrs Malaprop who is the star of the show: this being my first viewing of The Rivals, I can hardly imagine anyone else doing better in the role, it seems tailor-made for her. She endows her with such warmth and humour that one tended to find oneself laughing with and not really at her, and it is genuinely distressing to see her discover the truth about who has written the letters mocking her. Imrie seizes every opportunity to display her comic chops too, the incredible misjudged verbosity is always well-delivered, the constant shooing away of the recorder-playing heralds was a nice touch and her seductive swaying is just a sight to behold.

Among the boys, Harry Hadden-Paton as the dashing Captain Absolute and Tom McDonald as the ever-anguished Faulkland give great value for money, as does Robin Soans as the irascible Sir Anthony Absolute, but they are all somewhat upstaged by Christopher Logan's Mr Acres who owns the second half with a brilliant comic performance that left me frequently helpless with laughter.

There's also great support amongst the serving classes: Jenni Maitland's manipulative maid being a flirtatious delight, and Oliver Hollis and Sam Swainsbury as members of the Absolute household radiated a genial affability (even practically sitting in my lap at one point!) and displaying impressive multi-instrumental skills, including the recorder which amused me to no end. The staging is simple, a Georgian living room evoked with some hanging windows and furniture, but the costumes looked striking and nicely opulent.

It is great to see a theatre such as the Southwark Playhouse punching well above their weight with some superb casting, giving us the opportunity to see such talent as Dame-in-waiting Celia Imrie at such close quarters. And all told, this is a delightful, extremely funny production of a play which may be familiar to many, but is presented here with a freshness and inventiveness that should please most everyone.

Running time: 2 hours 50 minutes (in preview)
Programme cost: £2, in the form of a newspaper
NB: Charity Wakefield's appearance here now means I have seen the full set of the main players from the most recent BBC version of Sense and Sensibility which I loved and is well worth tracking down on dvd, a great adapation and cast to the hilt: it made me fall in love with both Wakefield and Hattie Morahan (and also reminded me of how much I like Dan Stevens, Dominic Cooper and David Morrissey) and I'm grateful and glad that I've had the opportunity to see them all on stage now.