Review: Priscilla Queen of the Desert 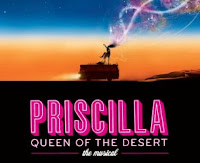 "Everyone likes to dress up, wear some sequins, get in touch with their feminine side...apart from lesbians that is"

When I found out a great Canadian friend who just happens to be a huge musicals fan was stopping in town briefly in the festive season, I had little doubt of what would be the best thing for us to see: Priscilla Queen of the Desert. For this is not a show about about subtlety: using a carefully judged collection of familiar pop songs, some amazing costumes and a production design team whose maxim was clearly 'more more more', this is a fun-packed, crowd-pleasing spectacular that was the perfect anecdote to the horrible weather.

It's based on the film of the same name, where three ill-matched drag performers take a road trip from Sydney to Alice Springs to meet up with the estranged wife and son of one of them, and little has been changed. Of the three leads, Tony Sheldon is superb as the transex 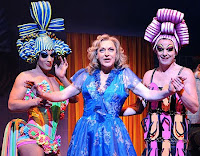 ual Bernadette, armed with a lifetime's collection of quick one-liners, a steady grace and an unerring conviction in who she is. The trumpet anecdote is one of the funniest things you will hear all year and Sheldon's performance holds the show together, elevating it beyond a series of drag turns. He is matched by Oliver Thornton as the overtly flamboyant Felicia who sweeps onto the stage in a spectacular opening number and almost steals the show again with the culmination of his particular journey. His performance practically reinvents the word camp but crucially he reminds us of the boy beneath the make-up throughout, and the relationship between Felicia and Bernadette is nicely portrayed with their acidic barbs finally making way for a grudging respect. By comparison, I found Jason Donovan underpowered and horribly affected, his campisms were way OTT, it looked like he thought he was in a pantomime.

There's no attempt to really mine any emotional depth here, many of the key issues raised are skated over smoothly and that is probably right, given the atmosphere of this show. It is a party, and it all lends the one genuinely moving moment, Tick reuniting with his son over a tenderly sung duet, all the more emotional wallop. My only real bugbear, Jason Donovan's mannerisms aside, was the lingering doubt of how much real singing we were hearing in the theatre. It may just have been the sound design but hardly any of it sounded live, not to say that it wasn't but rather that I prefer my live singing to be a bit more obvious.

I've kept the specifics of this review a little vague as if you haven't seen it already, there's tons of pleasure in discovering the next tune you hear or the next outrageous costume to appear, even the arrival of the amazing singing divas, and I want people to experience that as I did. If you're suffering from the January blues, then you could do a lot worse than grabbing a few friends and making a trip on Priscilla yourselves.