"Dumbledore's the greatest sorcerer alive - and he went into teaching?"


Having never previously been to the tiny Studio 2 in the basement of the Trafalgar Studios, I've now been twice in three weeks: after the highly enjoyable Public Property comes now "the unauthorised Harry experience", otherwise known as Potted Potter. A whirlwind trip through all 7 of the Harry Potter books, performed by two CBBC presenters, Daniel Clarkson and Jefferson Turner, with a collection of wigs, props and a generous helping of tomfoolery, this was 70 minutes of warm-hearted, unchallenging, silly fun.

It's a family-oriented show and so is strictly PG-rated, but this is probably for the best as it meant the material has worked harder to be funny rather than just smutty and inn 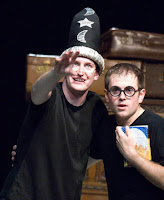 uendo-laden. And it did feel more like an extended comedy routine at times than a show per se: not that that was a bad thing, just a little unexpected. As with all the best parodies, there was some affectionate mickey-taking along with the story-telling, especially in the constant references to the outside world, but there's no doubting how much fun the two performers were having onstage and that was infectious.

Best bits were the game of Quidditch with audience participation, including two scarily enthusiastic children who were definitely not playing for fun(!), the PowerPoint presentation explaining just who is evil in Book 3 and the final duet which brought tears to my eyes! Sadly for a family show, there was probably only about 10 kids in the audience, but as the holidays approach I hope this will pick up and in any case, this really is a show that works well for all ages.