"There is a destiny that shapes our ends...rough-hew them how we may"
Edmond saw a couple of firsts: my first promenade production and my first ever trip to Wilton's Music Hall, the oldest and last surviving grand music hall in the world apparently: it is a venue that has only recently come to my attention with some interesting programming, indeed Fiona Shaw will be performing The Waste Land there next month. Sadly though, the hall is semi-derelict and fighting a losing battle to secure the funds to be able to keep it open and serviceable, a shame as it really is an interesting place.
Marking Elliot Cowan's directorial debut, this site-specific production of Edmond, David Mamet's 1982 play, makes the most of its venue, utilising varying locations within the Wilton's complex. Telling the story of a regular white-collar American chap whose meeting with a fortune-teller, who tells him "you are not where you belong", sets him off on a journey through the seedy underbelly of New York city life, Edmond's behaviour becomes increasingly erratic as less palatable sides of his character rise to the fore, in his search for self-discovery and redemption for his actions.

Following from his turn in A Streetcar Named Desire, Cowan takes on the 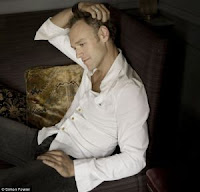 title role with aplomb (and some lingering hints of his 'interesting' accent from that show) but did extremely well to convince us of the hidden depths in this initially quite bookish-looking man. A selection of additional players did well in their multiple supporting roles and the use of a bluegrass trio, The Bonfire Band, was particularly ingenious as they provided excellent accompaniment, not least during the scene changes.
Cowan's decision to use the promenade format works extremely well on two levels: the play is quite episodic, with 23 short scenes, so it allowed for (mostly) quick scenes changes as we physically followed Edmond on his journey. But it also worked well in opening up Wilton's Music Hall and showing the audience parts of the venue that you would never normally see, but also parts of the main hall itself that you wouldn't necessarily notice during a traditionally staged event. It was a hugely fascinating tour which reminded you of the history of the building and how sad a loss it would be if it were to close. Limited to six shows, and 52 people per show, I feel particularly blessed to have been able to witness this great show, and I also feel Wilton's would do well to use this production, or at least a similar format, in the future to show off its assets in such an interesting manner.