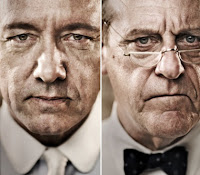 "I don't want to believe that we come from monkeys and apes, but I guess that's kinda besides the point"

Inherit The Wind is a courtroom drama, based on the true life story of a Tennessee schoolteacher who was threatened with imprisonment for teaching Charles Darwin's ideas on evolution, in direct contravention of school policy. A highly strung court case then follows, pitching creationists against evolutionists, and bringing two legal titans to a small town in Tennessee to argue the case, the ramifications of which clearly extend beyond that classroom in the Deep South. Its timing seems uncanny: even on the 150th anniversary of the publication of On The Origin of Species, a highly recommended (by me at least) film Creation, about Darwin's struggles with his own faith as he wrote it, has not been able to find a distributor in the US because it is considered too 'controversial' in a country where allegedly barely a third of the population actually believe in evolution.

The scale of this production really is admirably epic: the staging is superb, with the Old Vic's stage being opened up to a great depth 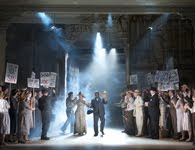 (you could probably fit the stage for Annie Get Your Gun on there 15 times over!), the already healthy cast is ably bolstered by a phalanx of supernumaries, bringing the total company to 50 bodies who bring an authentic air of claustrophobic small-town living to several scenes, most notably the prayer meeting just before the trial. The use of hymns sung by the company during scene changes further reinforces this strong sense of a community joined by the power of their faith.

Such largesse however does need to be matched by strong acting, and in the two leads of David Troughton as the Bible-bashing and frustrated politician Matthew Harrison Brady and Kevin Spacey as the more free-thinking and sharply comic Henry Drummond,

Inherit The Wind more than delivers with two powering, barn-storming performances. It is a sheer delight to watch these two go at each other during the trial scene which is worth the ticket price alone, but they both delivered throughout, Troughton's subtle hints of humanity through the bluster of his people-pleaser just edging it for me. And in a sea of supporting roles, Mark Dexter as the sceptical visiting journalist was a standout for me, with a cracking line about rancid butter that I can't quite fully recall.

As for the play itself, whilst it contains little in terms of intellectual debate on the key issues (or maybe because of this) it is highly entertaining, and offers a strong argument for tolerance in an ever-more polarised world. My only real criticism would be the use of a real monkey on stage. I felt it added nothing of value to the performance, and it looked desperately unhappy, clutching onto the leash about its neck throughout: I'm not even particularly an animal lover, but this made me sad. That aside, I would highly recommend this show (and then go and see Creation at the cinema).