Review: The Power Of Yes

Commissioned by the National Theatre to respond to the recent financial crisis, David Hare's latest work arrives at the Lyttleton in an attempt to try and cast some light on the global meltdown and how it was allowed to happen. The Power Of Yes is subtitled 'A dramatist seeks to understand the financial crisis' and is the result of a series of interviews carried out with key players from a range of institutions.
Anthony Calf plays the playwright himself in a quirky set-up as we are ins 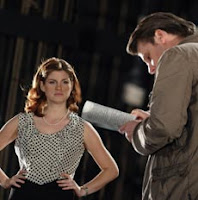 tantly informed that this is less of a play and more of a story-telling exercise, and guided by a Financial Times journalist played by the lovely Jemima Rooper, starts to ask the necessary questions to get down to the roots of the crisis and try to apportion culpability. The rate at which these questions are asked, and answered by a sometimes bewildering array of characters, leaves you breathless, but Hare has a knack for anchoring the flow of information to tangible markers. So when one feels in danger of getting lost in the financial jargon, we are hooked right back in with the kind of statistics that bring home the true scale of sums that were involved.

Because of the documentary like nature of this piece, there is very little 'acting' in the traditional sense aside from the central couple, but rather quick flashes of performances which were

nonetheless superbly realised. This is due to the calibre of the company which has been put together here, it is replete with talent: Malcolm Sinclair, Richard Cordery, Ian Gelder, Paul Freeman, Jeff Rawle, Jonathan Coy are just some of names unselfishly cameoing here making great impact with minimal stage time, but I particularly enjoyed Claire Price's garrulous Financial Times journalist and Bruce Myers' sibilant financier George Soros.

This is not the place to come if you are looking for a theatrical interpretation of the financial crisis, if you are then pop over to Enron and you'll be more than pleased. On offer here is a much more searing look at events and the genuine sense of journalistic investigation, with an immediacy that should appeal to those disinclined to peruse the lengthy reading list included in the programme.