Review: Annie Get Your Gun 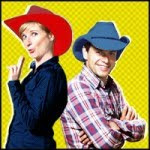 "Jumping Jehosaphat, well if it ain't the damndest thing I ever did see."

Running right through to January, the Young Vic has set a lot into Annie Get Your Gun, their longest running production to date. Starring Jane Horrocks as the sharp-shooting Annie Oakley, this musical contains some incredibly well-known songs, and so would seem like a fairly safe bet.

First off, the look of the whole show really is quite arresting, and not in a good way. It instantly evokes 'school show' as it really does look cheap and shabby, and the lack of depth in the stage is highlighted every time there's more than 4 people on stage as they are having to carefully negotiate their way around each other and the props without tumbling off. And on top of that, the design is really quite unsuited to the venue. Such a wide, shallow stage means that people sat towards either edge of the auditorium have se

vere difficulties in seeing the action when it moves to the other side. And the use of a cutaway above the stage means the front few rows miss the final scene (and the one shirtless moment!). Given that it is unreserved seating, it does seem quite unreasonable to expect people to fork out £30 and then have their view restricted.


For me, the production only really comes to life at certain moments, mostly when the whole company is working together. There's some great comedy movement during the airshow and vocally, their combined talents work well, especially when some interesting harmonies creep in. It was particularly gratifying to hear There's No Business Like Showbusiness sung in its rightful home, and Anything You Can Do, I Can Do Better had enough humour to carry it through without seeming too clichéd. I just wish there was some room on the stage for some fun choreography.


As the titular Annie, Jane Horrocks is largely good, but sometimes it felt like she was a little uneasy, not quite comfortable yet in the role. Part of this could be addressed once the show opens I guess and she settles more, but I have to admit to being disappointed by her vocal performance. It felt

like some of her songs were in the wrong key for her, and so her voice lacked strength and often just didn't deliver the requisite fireworks. It wasn't by any means bad, just not what I was expecting. Julian Ovenden fared better as her rival Frank, he has the look and sound of a young John Barrowman (for better or for worse!), very much in the matinée idol mould. And there was sterling support from John Marquez and Liza Sadovy, whose vocal strength showed Horrocks up somewhat, as the sidekicks and I loved their duet.


Once the adjustment has been made to the type of production you are witnessing, there is actually quite a lot to enjoy here. There's some nicely observed comedy, some beautiful harmonies and a great energy about the show. It's just hard to shake the feeling that you're watching an Am-Dram production which just happens to have Jane Horrocks in the lead role. Oh, and try and bag a seat in the middle of the auditorium!