When the Donmar first announced its West End season, taking residence in the Wyndhams theatre, there was a special offer if you bought tickets for ll four productions at the same time, so incredibly, I've had a ticket for Hamlet for over 18 months! Indeed the entire run had been sold out for quite some time before it even opened, such was the draw of Jude Law's name as Shakespeare's eponymous Dane.

The weight of expectation must have been huge on Law's shoulders. Not only was he following a superlatively-received Hamlet at the RSC with David Tennant, there has been a case of somewhat diminishing returns on the Donmar's experiment, with Madame de Sade in particular disappointing many after Ivanov's excellent start. So the sound of gleeful knives sharpening was strong, with a lead actor more known for his looks than acting talent these daystaking a lot of flak before he had even started his run. And so how does he do? Well, I was hugely impressed. Many forget he is a classically trained actor, and he appeared in many great films before his failed attempt to break into Hollywood's leading man category (the Talented Mr Ripley is a personal favourite), and this

performance should help to remind people of his talent. He has a great mastery of the text, and so the many uber-famous passages that this play contains seem fresh and new and intensely personalised to Law's Hamlet. "To be or not to be" in particular is convincingly rendered, against a startling backdrop of falling snow, uncertain at first but increasingly confident, mirroring his own movement along the path of self-discovery throughout the play. His is a very physical performance, there's a lot of movement as he constantly rages against the situation, and if one were make any criticism, then it would be that there needed to be a touch more vulnerability introduced into the register to better show the torment that means that play last for over three hours, rather than being done with in one swift act of revenge.
Amongst the supporting cast, Penelope Wilton stands out as a truly superb Gertrude. She is quite often onsta

ge without speaking, but her looks are she takes in what is happening around her are simply priceless, and when she does open her mouth, she is more often than not heartbreaking: her line about "you have cleft my heart in twain" was almost worth the entrance fee alone. Gugu Mbatha-Raw plays Ophelia with a nice subtlety, almost underplaying it too much perhaps, one doesn't feel her presence quite as much as I thought we would. And Kevin McNally strikes the perfect note as Claudius, brimming with a confident arrogance until Hamlet's actions start to chip away at his position. 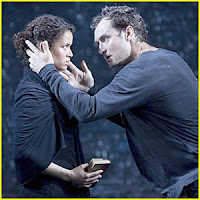 The staging is typically Donmarish (Donmarian?): simple, pared-back and with eye-catching flourishes which do wonders in evoking atmosphere. Here the bare stones of the castle of Elsinore are beautifully enhanced by some superb lighting, switching us from room to room inside the castle with the minimum of effort. The dropping of highly coloured curtains provides drama: a see-through one is used as the hiding place for Polonius, which allows us to see his tragic death all the more clearly, and the aforementioned snowfall is most effective, all the more for it being quite unexpected.
So the Donmar can congratulate themselves on a job well done. Hamlet provides a fitting conclusion to what was quite a daring experiment which has been highly successful in terms of box office with very affordable ticket prices, if not always with its choice of production. As already mentioned, the run is sold out, but returns and day tickets are available and I would make the effort to see it as it is a most accomplished addition to the West End.