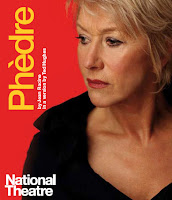 In surely one of the most anticipated theatrical events of the year, Dame Helen Mirren returns to the stage for the first time in five years, to the Lyttleton at the National Theatre. Phèdre was written by Jean Racine back in the seventeenth century, and this production uses a translation by the late Ted Hughes in his typical free verse style. As it is my second Dame in three weeks, my companion for the evening was once again Aunty Jean, and this review was greatly helped by our post-play discussion over a nice cool G&T.

It is a quintessential Greek tragedy: the queen Phèdre lusts after her stepson, and in the absence of her husband Theseus for several mon

ths and the dubious advice of her nurse, eventually succumbs to her desire. Unsurpisingly, the revelation is not well received and then matters are made immeasurably worse by the return of Theseus. In her desperation to conceal her illicit attraction, Phèdre then makes a terrible accusation which sets in motion a chain of disastrous events.

The play takes a little time to settle down; there is a lot of setting up to be done and a great deal of parentage is explained which does require a little knowledge of Greek mythology, although not a lot. But after about 25 minutes or so, something just clicks and I was hooked. Mirren is electrifying in the title role, she has total command of the stage, prowling around in her anguish and her reading of the verse is utterly engrossing. Dominic Cooper as Hyppolytus, the object of her desire, does well to match her intensity with a controlled performance, never overplaying his revulsion at the actions of his stepmother.

As the nurse who advises Phèdre down the path to destruction, Margaret Ty

zack is superb. I have to admit that I was not particularly impressed with the Chalk Garden at the Donmar last year and so was a little surprised when Tyzack swept a large number of awards for her role in that play, but she definitely won me over here. Her chemistry with Mirren is so convincing and one totally believes in her devotion to her mistress, even as the situation deteriorates out of control. John Shrapnel as Théramènes is also mightily impressive: his astonishing speech towards the end of the play has to be seen and heard to be believed, very impressive indeed! Ruth Negga and Chipo Chung also deserve honourable mentions (Chung is in two of my favourite ever Doctor Who episodes: geek alert!) in their relatively small roles, providing sterling support. My only criticism around the acting would be that Stanley Townsend's performance as Theseus was a little wooden, and his voice was really rather monotonous.The set looks amazing, all sun-bleached stone and Aegean blue ski

es, a rather harsh landscape under a merciless sun and this, combined with the bare minimum of props, places the emphasis squarely on the verse and the acting. The play runs for touch over two hours with no interval, but the intensity of the acting and the production meant that I did not even notice. Very highly recommended, and whilst the initiative to get this play shown in cinemas is very commendable, if you have the chance to get tickets, this is a live experience not to be missed.