Visit number two for me to La Cage aux Folles at the Playhouse Theatre for a number of reasons. My first trip earlier this year was an absolute hoot but perhaps a little more wine-soaked than was advisable, I wanted to surprise Aunty Jean with a fun night out (as opposed to the previously advertised Aunt Dan & Lemon) and finally I wanted to see Philip Quast and Roger Allam as I had heard great things about their performances. I saw Douglas Hodge and Denis Lawson in the main roles last time, and could not imagine them being bettered, such was the quality of their 'turns'. 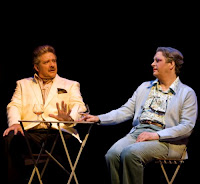 ual to the task, and I think I might even actually have preferred these two. The key to this musical is that it is actually the sweetest love story between Albin and Georges and so the relationship between the two has to be spot on and I think this is where they edge it this time. There's such a great sense of shared romance onstage and the two actors are so comfortable with each other, you can really believe that they have spent a lifetime together.
Tune-wise, it perhaps isn't the greatest musical, but the repitition of key numbers such as Song on the Sand and Look Over There obviously worked as I have been humming them endlessly for the last few days and they are actually good songs. The most famous of them all though is I Am What I Am, which is just superb. Stripped of all the campness that is often associated with this song, the focus is placed squarely on the lyrics and one realises just how moving a piece it really is. It also actually benefits from the fact that Allam is not the most gifted singer, much like Send In The Clowns from A Little Night Music, it is made a hundred times more poignant from a more human delivery.

As ever, the Cagelles gave great support with their often astonishing dance moves and t 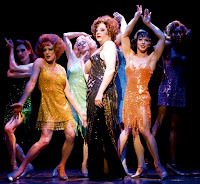 heir ability to maintain a routine in the face of giant pink balls coming at them (you really need to see it to get it...) is hilarious to watch. The rest of the cast are also good, Jason Pennycooke as the maid gets some good laughs, but this is a show all about the two leads. There is something so powerful about having two men as unashamedly romantic leads and when they are performed so well, as they are here, it gives this production a real sense of power. There's some amazing deals available for tickets to see this at the moment and so I could not recommend it any more: go and see it people!