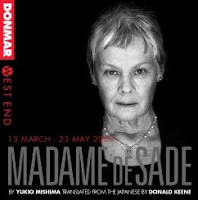 The third play in the Donmar's residency at the Wyndham's Theatre is Madame de Sade, a slightly obscure work by the Japanese playwright Yukio Mishima, which fulfils Michael Grandage's promise to bring lesser-known works into the West End alongside the classics. Unfortunately, as many reviews have already said, this is not really a play that stands up to the exceptionally high standards already set by this season, despite the efforts of an excellent cast.

The play tells the story of the life of the Marquis de Sade just before the French Revolution in three short acts, moving a few years through time with each act, but tells it throug

h the eyes of six different women who have varying relationships with him, and the Marquis himself does not actually make an appearance. The women are his wife, his mother-in-law, his sister-in-law, a servant in his house and two other ladies and they each represent a single viewpoint which rather limits the opportunities for the actresses to display their talents.

Dame Judi Dench plays the mother of the Madame de Sade, Madame de Montreuil, and looks amazing in the wigs and costumes, and gives as good a performance as she can, given the material. Struggling to understand the motivation of her daughters, she shows her displeasure well, but is not given the opportunity to do much more. Francis Barber's Comtesse de Saint-Fond, representing lust, was a very funny and vibrant character and in

jected some much needed verve into her scenes. As a result, one really felt her absence in the final act. Rosamund Pike probably deserves the greatest plaudits though as she has a really difficult job as the titular Madame de Sade, Renee. She has such long and unforgiving monologues and an unflinching devotion to her husband that is a little hard to understand, yet she still managed to wring every possible bit of emotion and interest out of the text. Deborah Findlay as religion, has a great opening scene with Barber, Jenny Galloway has some humourous moments as the long-suffering servant, but Fiona Button as the younger sister has little of interest to do. 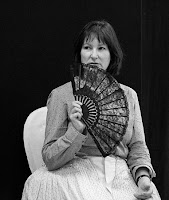 is that it just wasn't that interesting at all. The inflexibility of the characters' viewpoints mean that the discussions of the Marquis' behaviour are quite dull, as the debate is thrown to us, the audience, rather than amongst the cast: there appears to be no deviating from the designated opinion of each character and I found this to be quite a strong weakness of the play. Combined with the extreme wordiness of the dense text, it was sometimes hard to maintain adequate concentration levels.

But this did mean that I paid more attention to all the other details which were of the highest quality. Fabulous costumes and hair, interesting sound and light effects during the soliloquies (I thought Rosamund Pike's echoing final speech was fantastic and almost convinced me I like the whole play!), the

projections on the back wall which evoked the subjects being discussed, and even the positioning of the actresses was interesting as they took poses whilst one of them delivered their speeches, creating beautiful tableaux. So it was quite educational to be able to focus on these aspects of the show, but it was a shame it had to be at the expense of any interest in the play.