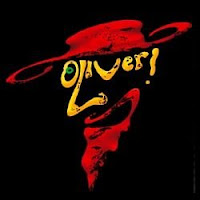 This review marks a momentous occasion as it features the first appearance of Aunty Jean, one of my most faithful theatre companions, despite living nearly 200 miles from me in Wigan. We try to see at least one thing every time she visits whether for pleasure or work, but it has been a while since she has been down so Oliver marked her first 2009 London theatrical trip.

Fortunately it was well worth it, as this show did not disappoint on any level (and many levels it did have!). The sets for this show were truly awe-inspiring: Fagin's underground lair was cleverly constructed; the depth of the alleyway for the street scenes was huge so it gave a great sense of scale to the proceedings, one which has been sadly lacking in many large recent productions, cost-cutting I guess, and the lighting from scene to scene could not have been more different, yet still highly effective. This all combined to give great energy and movement to the show, which scarcely needs it due to the highly familiar and zippy score.

The tv show "I'd Do Anything" was used to recruit the roles of Nancy and Oliver for this show and we got Harry and of course Jodie Prenger along with the other stars of the cast. Both of them acquitted themselves well, Jodie's star moment of As Long As He Needs Me was particularly effective, re-sited in the abusive relationship with Bill Sykes as opposed under the glare of studio lights and Lloyd-Webber, Barrowman, van Outen and the like. Prenger showed real warmth and affection to the young kids in Fagin's band and really shone, and I hope that this is the start of good things for her. One thing that is quite curious though, is how little each of the characters actually appears in the show, no one really gets a huge amount of stage time, but this simply builds up the ensemble feel to the production which is no bad thing. Other notable mentions should go to the young boy playing the Artful Dodger who was excellent, and to Rowan Atkinson as Fagin. Atkinson delivers a great comic performance which somehow remained distinct from his other hugely famous comic creations, and his songs were a highlight.

For me the best part was Who Will Buy. It has always been my favourite song from the show, and this rendition of it was superb, utilising the aforementioned expanse of stage and the whole cast with a vast array of tricks from balloons and acrobats to deliver a truly uplifting experience. And that it probably true of the whole show: it does not pretend to be anything particularly genre-breaking, but it is highly entertaining and was particularly perfect for that grey, cold, rain-soaked Monday night!