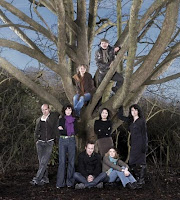 Still utilising the in-the-round format introduced for the Norman Conquests, the Old Vic now hosts the first revival of Brian Friel's Dancing at Lughnasa. Telling the story of five unmarried sisters living in rural Ireland, the play is actually narrated from the memories of a seven-year-old Michael, the illegitimate son of the youngest sister, now grown up: a framing device which initially proves very effective. The play looks at the struggles faced by the women to subsist in increasingly uncertain economic times, exacerbated by their unwell brother recently returned from Africa and Michael's father's unexpected visit to their cottage.

The five actresses playing the sisters have a great chemistry, and I longed for more scenes with all five of them simultaneously on the stage, but Simone Kirby as Rosie is given much less stage time than the others. Niamh Cusack came close to stealing the show for me, she effortlessly showed the great strength in her character who assumes the responsibility of keeping spirits high in the household, whether it be through cooking (she displays some great bread-making skills on-stage), through her melodic singing, or just her joie-de-vivre. Her scenes with Michelle Fairley's more matriarchal Kate were spine-tingling as their frustrations at their ever-worsening situation threaten to take over, but they can't allow their feelings to explode as they have the rest of the family to think about. Susan Lynch's middle sister Agnes is another sterling performance: bubbling with repressed feeling for her sister's amour Gerry, and burdened with a terrible sense of responsbility for Rose, Agnes came to symbolise the tragedy of the story for me. And finally, Andrea Corr in her London stage debut as the youngest sister Christina and mother of the narrator Michael, makes a decent attempt. She probably has the hardest role, since whereas she sparkles in the scenes with her sisters, she has the most scenes with her son, who is never present on the stage, and so is often acting fairly mundane lines to empty space which I feel would be a challenge for most actors.

Since I've covered the women, I may as well go the whole hog and do the three men too! Finbar Lynch plays the returned brother suffering from some random illness and amnesia which caused him to lose his faith, and whilst he performed well, I felt the character did not add much to the play, aside from adding another burden to the already torrid household. As the errant Gerry, Jo Stone-Fewings breathed an anarchy into the existence of the sist

ers which was a joy to behold, as the implication was clearly that he was one of very few men with whom they had any contact. And finally, Peter McDonald as Michael did a fine job as the narrator, with the assistance of some atmospheric music and lighting, setting the scene excellently, and he also had some touching scenes reciting the lines of his seven-year-old self.
The only weakness I felt with the play was the lack of real action in the second half [this bit contains spoilers for the ending of the play so beware]. The first half built up wonderfully and engrossed me totally by the interval, but I felt a little cheated when at the end of the penultimate scene, Michael narrated the fate of each of the main players, thereby almost belittling the importance of the rest of the play. I'm not sure if it was just me and my colleague, but I ended up feeling a little dissatisfied which was a great shame as I thoroughly enjoyed this play and, as with most things I have seen this year, I would totally recommend it to you!