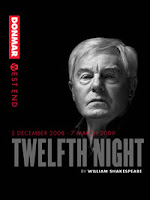 Following on from a sensational Ivanov with Kenneth Branagh, the Donmar Warehouse West End season continues with this prodution of Twelfth Night, featuring Derek Jacobi as the star name in a very strong cast.

After the snowfall that predictably brought London to a standstill, my journey to the Wyndham's was extremely torturous and unfortunately put me in a foul mood which did not bode well for an evening at the theatre. And whilst this production had

much to dispel the howling wind and cold outside, it didn't quite achieve the dizzy heights the rave reviews had intimated. One of those dark comedies full of gender-bending escapades, Twelfth Night requires a certain suspension of disbelief that was just lacking in me tonight.

The comedy is there for sure, with some great laugh out loud moments, but there were too many moments where I just wanted to shout out 'but WHY?'! I felt there wasn't enough conviction in Viola's decision to disguise herself, and I had no real sense of which of the men actually really wanted to meet up with ladies or just remain within their own manly (read homoerotic) company.

All in all, a disappointing night given my expectations, but perhaps with an easier journey to the theatre and a sunnier disposition I might have found this more enjoyable.