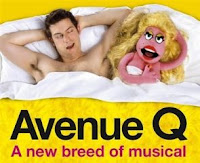 So, up to my third trip to Avenue Q now with yet another group of people to whom I have raved about this show: I feel I ought to get some kind of commission at this rate. This will be a short piece as you can read my earlier two reviews which cover the production in much more depth.

The only notable change is the first major cast replacement with Ann Harada, who came over from the New York cast when this first opened, leaving the role of Christmas Eve to be replaced with Naoko Mori, who is perhaps most famous from her role in Doctor Who spin-off Torchwood. Making a completely different visual impact and bringing a different comic sensibility to the part, Mori impressed despite perhaps not inspiring the same vocal confidence as Harada.

In terms of the show, it still fills my heart with absolute joy, full of laugh-out-loud moments, lyrics that remain witty as ever and some of the most hard-working actors on the stage, manipulating puppets, covering more than one role and making it all seem completely effortless. So in case it isn’t obvious, I still heartily recommend this show and at this rate, you may still bump into me making yet another trip!