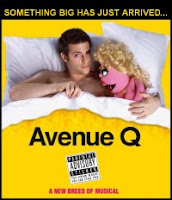 Well as predicted, we went back to this show which is close to being one of my favourite shows ever even after just the one viewing, with a new set of friends as I feel it is my duty to spread the word about this show. You can read what I thought about it on my earlier review, but it was interesting to note what I had neglected to mention first time round.

The Bad New Bears are close to being the funniest things in the show, a little too fond of the demon drink and getting people into trouble, they brighten up the already-bright stage with their YAYYY!!s no end. I loved the little bits that appear on the screens either side of the stage as well: I won’t give any of them away but they help with the clever allusion to this being an adult version of Sesame Street with its life lessons.

Another thing is how many of the tunes and the lyrics had wormed their way into my head. I was laughing in advance of quite a few of the funniest lyrics (probably to the annoyance of those around me) and could hum along with many of the songs which is really rather impressive for a new musical.

Looking at it though, I’m not sure I really get why Gary Coleman is in there. Never having seen Diff’rent Strokes or knowing who he is, means a fair bit of the humour around him flies over my head but not so much that it really bothers me. And I suppose the second half doesn’t have as many killer songs in it after the stonking first half as a couple in our party pointed out, but you can hardly say that it starts to flag at any point.

In case it isn’t apparent, I love this show. Lots. And I really think you should book tickets to go and see it.