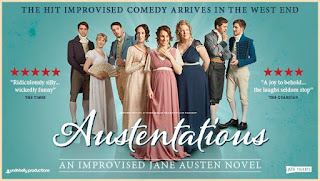 It's no secret that I do enjoy a bit of improv and alongside The Showstoppers, Austentatious are surely one of the most reliably entertaining and inventive of companies in the field. Regular readers will know that I'm a big fan, regularly attending their monthly residency at the Leicester Square Theatre and so I was delighted to find out that they've gone for an upgrade and for the next few months, you can find them in one of the grander houses of the West End at the Piccadilly Theatre.

If you're new to the game, audiences get to suggest the title of a lost Jane Austen work like below

And our #topunusedtitle is the GCSE-set-text-tastic TO KILL A MOCKING DE BOURGH (and may we recommend its recently unearthed sequel, Go Set A Wickham) pic.twitter.com/8Qsu8sMrmd
— Austentatious (@AustenImpro) December 6, 2017


and once one is picked - tonight's was We Need To Talk About Emma - the company of six (from a larger rotating crew of eight) set about creating an entirely new literary masterpiece from scratch, relying on nothing but the surreal swerves of their imagination. And without fail, they are simply hilarious.
I could try and describe a plot that included strict fathers, thought-dead mothers, butterfly collecting, mannequin construction, and cat murder but it's impossible to convey how sublimely silly it all gets. Watching the guys trying to keep it together during random dance breaks, or trying to out-pun each other (the Bruce Forsyth stuff was inspired), or just responding to what's happening around them as, particularly when a leg broke off a chair, is endlessly good fun and what keeps me coming back time and again.

To suit its more august surroundings, a fold-out treasure box of a set has been constructed and the show has been extended with an interval inserted. And a rare scene featuring all six of them proved to be a real highlight as they all bounced off each other to gloriously funny effect, mercilessly trying to throw each other under the comedy bus. A well-deserved entry to the West End then, and well worth a trip in the coming months, to lift the winter gloom.