As ever, the wait for the end-of-year lists of favourite plays and performances has to continue until I've actually stopped seeing theatre in 2017. But in the meantime, here's a list of 11 of my top moments in a theatre in 2017, the things that first pop into my mind when someone says 'what did you enjoy this year'. For reference, here's my 2016 list, 2015 list and 2014 list. 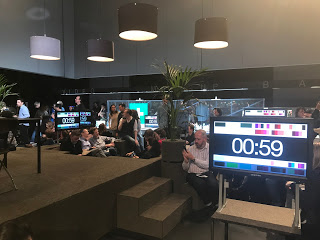 Self-imposed rules being what they are, Toneelgroep Amsterdam's Roman Tragedies isn't eligible for the official year-end list as it is a production I've seen before, 8 years ago as it turned out, when it ranked as the best thing I saw in my full first year of blogging. In the intervening period, much has happened - not least Ivo van Hove's rise to the director that everyone best loves to love/hate - and so this epic show had gained something of a mythic status for those without the foresight to see it in 2009 😉 Fortunately, it has lost none of its power and with the added encouragement of using social media throughout, it pushes the bar even further. I loved it so much that I used the onstage wifi to book for a return visit before the first show had even finished.

Getting the Natasha Barnes thing

It's the understudy's dream, getting the call to step up to the plate and nailing it so well that you become a star. But such it was for Natasha Barnes when she filled in for the indisposed Sheridan Smith in Funny Girl, so much so that they co-headlined the UK tour of the show. Obviously I missed out on all of this so it wasn't until this year's concert of Mack and Mabel, presented by the London Musical Theatre Orchestra, that I got to witness her absolute star quality at first hand. Her rendition of 'Time Heals Everything' pretty much stopped the world and brought the house down in its astonishing power - Barnes is fast becoming one to make sure you don't miss in future,

In Other Words, such light and sound

The play that probably affected me the most in 2017, as in had me properly sobbing for most of my journey home, was Matthew Seager's elegiac study of dementia In Other Words. And in a perfectly pitched production, it was the uncompromisingly intense lighting from Will Alder and sound from Iida Aino that, almost unbearably, periodically pitched its audience into disorientating disquiet and thus refusing to shy away from the cruel despair that this condition can wreak.

One of the most anticipated theatre events of the year was the return of Angels in America and if the production ended up being something I like a lot rather than truly loving, it was still an immense privilege to be a tiny part of the thundering epic that was the two-show day. 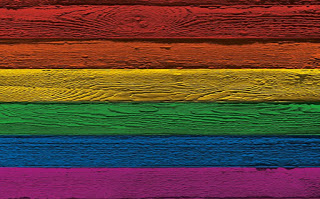 Nowt so queer as theatre folk

And keeping things gay at the National, I really appreciated their Queer Theatre season, a set of readings of seminal LGBT works, reflecting the community's experience in being represented by theatre over the last few decades. An intelligent and thought-provoking set of work accompanied by Q&As which were unafraid to tackle some of the more difficult questions about representing the full spectrum, about intersectionality and how much further we all still have to go. 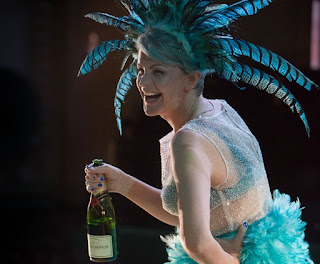 Top of the Twelfth Nights

And speaking of, it was interesting to see some high profile productions of Twelfth Night pushing the boundaries as we got a lesbian Malvolia in the Olivier courtesy of Tamsin Greig and Simon Godwin whilst at the Royal Exchange, director Jo Davies cast transgender performer, writer and activist Kate O'Donnell as Feste to breathtakingly beautiful effect. In a play that has always been about gender fluidity and the questioning of one's identity, this was a production that took audiences by the hand and said look, this is the modern world, full of people who are happy like you, who are sad like you. Infinitely more powerful than all troll-baiting comment you might find on Twitter...


Building a tight connection to my heart

Not being the biggest Bob Dylan in the world, I had my doubts about Girl from the North Country but within one song I knew I'd like it and within three, I knew that it was going to be one of my shows of the year. The key moment was Sheila Atim's delivery of 'Tight Connection To My Heart (Has Anyone Seen My Love)' that completely won me over, a complete reinvention of the song into something full of aching longing and gorgeous restraint. Utterly revelatory and the heartbeat of the show encapsulated in one glorious moment.

Simon Higlett taking Chichester into the round

The upswell in event theatre shows little sign of abating and at its best, inspires all involved to really up their game. And with Blanche McIntyre's revival of The Norman Conquests at the Chichester Festival Theatre, it was Simon Higlett's design - reconceiving the auditorium into the round - that really elevated the production as it allowed the lucky few who got onstage seating to experience the trilogy as if in the intimacy of the tiniest studio. 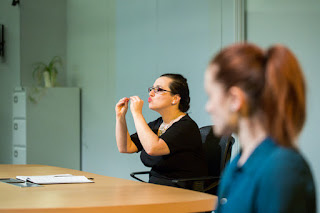 Deafinitely making up for lost time

It has taken me an appallingly long time to get around to seeing some of Deafinitely Theatre's work but it did mean that my introduction to them was via the blistering social commentary of Mike Bartlett's expert two-hander Contractions, which had the added bonus of being put on in the magnificently bizarre surroundings of the New Diorama's ND2 space. I shall look forward to revisiting both as soon as I can.

Sparking up for Audra

Smoking may be a dirty habit but when none other than Audra McDonald asks you to light her cigarette (as part of the glorious Lady Day at Emerson’s Bar and Grill at the Wyndham's) I ain't gonna say no. The transformation of this West End house into a cabaret joint worked perfectly and being that close to perfection was just stunning. 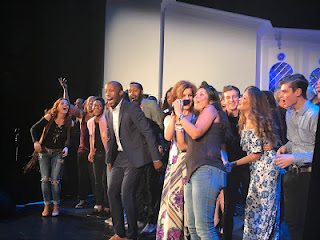 Solidarity with Songs and Solidarity

And a final mention for the herculean efforts of Giles Terera and Danielle Tarento in pulling together the Songs and Solidarity benefit gig at such short notice. A concert in aid of those affected by the Grenfell Tower fire, it made us laugh, it made us cry, it made our hearts sing with joy, it made us dig as deep as we could into our pockets. A powerful reminder of the good in the world even at the darkest of times.