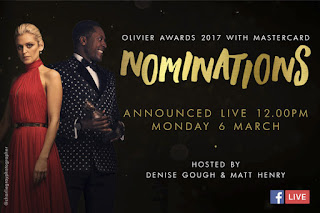 Headline news are obviously Harry Potter and the Cursed Child racking up a record 11 nominations, and Groundhog Day dominating (perhaps more surprisingly) in the musicals realm. I've given slightly more detailed thoughts to the acting categories:

But more generally
- Nothing for the Donmar's Shakespeare Trilogy? Really?
- it's a little disappointing to see such a preponderance of white faces in so many of the categories (I'd argue Lucian Msamati is the biggest snub here)
- no women up for Best Director for the second year in a row (Vicky Featherstone the obvious choice to me).
- two sets of multiple group nominations feels a bit weird, though I need to think more about why this is
- I'd've liked to have seen Andrew Wright's choreography nominated and am surprised that Half A Sixpence doesn't rank in Best New Musical - the oddity of Dreamgirls being there when it was written in 1981 (versus the original bits of Sixpence from 1963) showing how weirdly defined a category it is.
- Best new play and Best new comedy are both whackadoodle
- Little love for the Royal Court in general and not enough for the National, in my opinion.

What are your thoughts? Read on for the full list of nominations...

Best entertainment and family
Cinderella at London Palladium
David Baddiel – My Family: Not the Sitcom at Vaudeville theatre
Peter Pan at National Theatre – Olivier
The Red Shoes at Sadler’s Wells