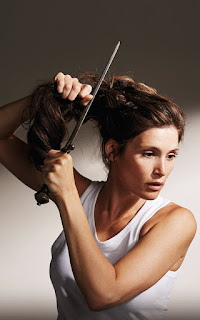 This is Bernard Shaw's Saint Joan but very much via Josie Rourke, as the medieval piety of the pre-show entertainment gives way to the uber-modernity of this interpretation with the opening flourish of a tablecloth being whipped away (more impressive than it sounds!). The gods being worshipped here are high finance and business as scenes are set in companies like Vaucouleur Commodities Brokerage and Dauphin Holdings, Evan Davies and Bloomberg news tickers give us regular updates and it is in the midst of all this that Gemma Arterton's Joan arrives, the sole figure in period dress.

Dealing with an amusing take on the egg crisis of the first scene, and using Skype to correctly identify Fisayo Akinade's spoiled manchild heir of a Dauphin in the next, the modern take is clever but there's a strange tension that never quite resolves. The text has been cut but not completely modernised, so talk of battles and forts sit alongside the rise and fall of stocks and shares and it doesn't settle into an interpretation that didn't leave me going 'you what now' until it starts to play the drama straight as in the English plot to bring about the downfall of the woman uniting the French against them. 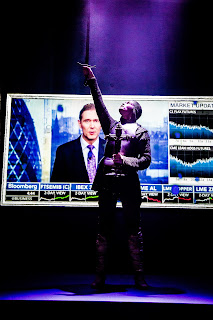 From then on, through the trial and its aftermath, the production soars, mainly on the strength of Arterton's superlative performance. A woman alone, literally so in this all-male company, Rourke emphasises this through bathing her in an almost holy glow from Howard Hudson's lighting. And her demeanour is beautifully subtle - perhaps inspiring more wonder than overt warmongering - the way in which she tenderly strokes the cheeks of the men around her, who find they can rarely resist, makes you understand the fear she inspires in the establishment that she challenges.

That establishment is well-characterised by a strong cast. Elliot Levey's cleric Cauchon and Jo Stone-Fewing's scheming Warwick brilliantly play the lengthy debate that takes us up to the interval, exploring the fear of rising nationalism and heresy that she represents to them, whilst Richard Cant's Little Englander de Stogumber froths at the mouth with his copy of the Daily Mail next to them. Hadley Fraser's Dunois and Rory Keenan's Inquisitor also stand out and it is salutary to see Arthur Hughes, an actor with a physical disability, take so central a place in the company too.

Robert Jones' design does look a treat when it is melding the modern and medieval, historical imagery bleeding onto high-definition screens and much use is made of a revolving stage. And Christopher Shutt's sound design blends soaring sacred peaks into its contemporary soundscape most effectively. It may take its time to get there, but this is a powerful Saint Joan and proof, following her radiant turn in Nell Gwynn, of how Gemma Arterton is turning into a most accomplished stage actress indeed. 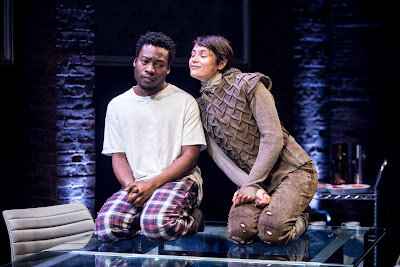 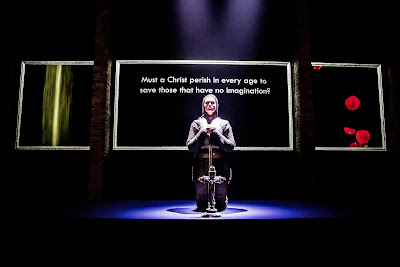 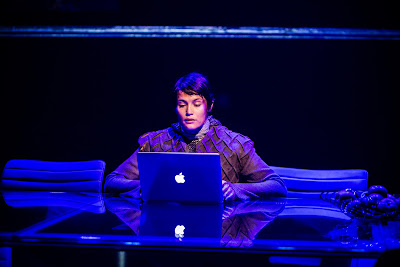 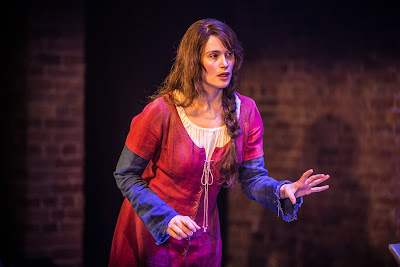