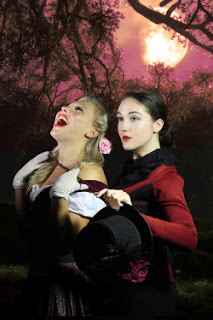 The Hope Theatre's Gothic Season winds to a close with a slightly more positive take on the genre - festive-gothic perhaps - in Bryony Lavery's Her Aching Heart. A pastiche of Gothic literature in which modern day Harriet and Molly find themselves both reading the same lesbian bodice-ripper novel, it just so happens the main characters are called Lady Harriet Helstone and Molly Penhallow, and so we see connections build between both their real and literary selves as they take the first steps in a putative relationship.

Directed by the Hope's AD Matthew Parker, the re-enactment scenes are quite frankly hilarious. Split into chapters with titles like 'A Nun Has A Nightmare', 'A Buxom Young Wench And A Sprightly Old Woman' and 'Thorns', the love/hate tug of war between village lass Molly and society lady Harriet is fast-paced and funny, with a tip of the hat, a wink of an eye and its tongue very much in cheek. They meet on a hunt when Molly tries to save the fox, played by a hand puppet, and once the broad and bawdy humour starts, it rarely relents. 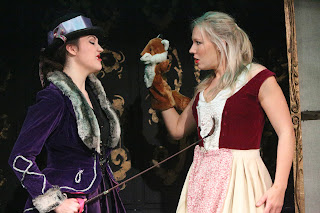 Lavery's script brilliantly skewers the florid language of many a kind of novelist with its "lackadays", "uluating bosoms" and pronouncements like "the sun streaks like a basset hound across the fields". And in the hands of plumly-accented Colette Eaton and dramatic damsel Naomi Todd, its always over-the-top but never overdone. Even with its "knobs and knockers", the humour is spot on, absolutely jam-packed with witty visual gags, from the fire that 'glows' to animal CPR to the best chandelier-swinging swordfight you ever did see. 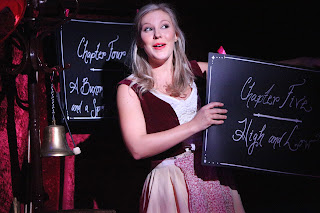 Rachael Ryan's design of devoré drapes and velvet curtains is suitably lush and theatrical and the construction of a false wall deals wonderfully with the practicalities of so many quick costume changes. Tom Kitney's lighting is delightfully playful in enhancing the meta-theatricality and Paul Freeman's sound design also has fun, as well as balancing with deeper moments, especially when we unexpectedly find the romance in the cod-romance of an amusing but poignant bed scene.

It's become something of a running joke, the apparently unshakable trope of dead lesbian syndrome but it isn't really that funny - the dearth of positive lesbian representation in popular culture is shameful really. And that's what makes Her Aching Heart so special in the end, the fact that it is a simple, uncomplicated love story at its heart. Yes it is universal but yes, it is also unashamedly all the shades of the LGBTQ+ rainbow - and as Parker gives us one final fabulous surprise at the last, my heart filled with pride. No wait, with Pride (it was World AIDS Day after all - do give what you can). A vital and vibrant alternative to all those pantomimes out there and hugely recommended.