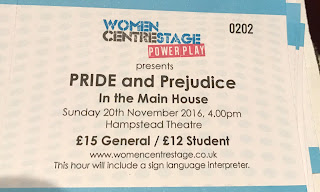 “Being deaf isn’t being broken”

The middle session of Women Centre Stage: Power Play Festival saw our first trip into the Hampstead's main house for PRIDE and Prejudice. Opening with What I Was Told I Could Be And What I’ve Become, a collection of new worldviews from Graeae’s female writers. Directed by Jenny Sealey, six scenes played out with increasingly intermingled with each other, different experiences of life as disabled women coalescing into a theatrical roar.

The rest of this session was devoted to two shorts looking at pride and prejudice respectively. First was Chloe Todd Fordham's The Nightclub, another play I saw at Acts of Defiance, and another that I loved. knowing how it plays out made it even more agonising to sit through and a surprise that needs to be witnessed whilst seeing the play (no spoilers here!). But I'd also forgotten just how beautiful it was to watch Marlene Sidaway's newly liberated widow dance with such gay abandon.

And then Tanika Gupta's wonderfully frank and flirty A Perfect Match wrapped things up beautifully, directed by Pooja Ghai with a keen sense for Gupta's comic, even saucy, humour here.