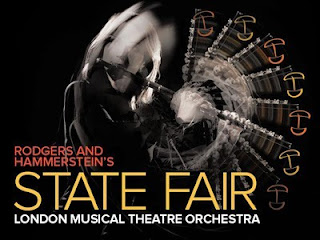 On 6th November 2016, Rodgers and Hammerstein’s ever popular State Fair will be performed for the first time on the London stage as a symphonic concert by the London Musical Theatre Orchestra under award winning director and Evening Standard Awards nominee Thom Southerland (currently doing amazing work with Ragtime) at Cadogan Hall.

In a double first for the LMTO, this is also the first full scale public performance by the company which debuted its inaugural gala, in June of this year, to a packed house at Bishopsgate Institute where the orchestra is in residence.

The 32-piece orchestra, conducted by LMTO’s founder Freddie Tapner, brings to life the rich music of the 1996 Broadway production about the Frake family and their trip to the Iowa State Fair (last seen in London in 2010 with this Finborough production).

Anna Francolini has replaced an injured Sophie Thompson in the forthcoming Peter Pan at the National.

Sophie Okonedo will join Damian Lewis in next year's revival of Edward Albee’s The Goat, or Who Is Sylvia? directed by Ian Rickson.

John Tiffany's The Glass Menagerie, which has has successful runs on Broadway and at Edinburgh, will play at the Duke of York's from late January, marking Cherry Jones' West End debut and the return of the marvellous Kate O'Flynn.

The Stage and Digital Theatre's interesting set of theatre interviews continues with the marvellous Juliet Stevenson.

Before she stars in Mary Stuart @AlmeidaTheatre, Juliet Stevenson discusses her career in our new video interview https://t.co/FWiHjQQpS8 pic.twitter.com/AIKznLCT5G
— The Stage (@TheStage) October 23, 2016

And to round things off, here's a snippet from an interesting looking short film from this year's Papatango prize winner Matt Grinter, The Dog and the Elephant, starring Jack Johns.

'The Dog and The Elephant' - Prologue from Found on Vimeo.