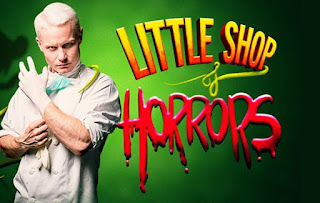 Sell A Door Theatre Company have built quite the reputation for touring plays and musicals the length and breadth of the UK and that reputation will surely only grow with this cheerfully good-natured production of evergreen cult musical Little Shop of Horrors. Director Tara Louis Wilkinson may not do anything dramatic to the classic Alan Menken/Howard Ashman show but her small-scale production captures its spirit perfectly and ought to please audiences across the country until Christmas.

This 1950s spoof musical, based on the iconic B-movie of the same name, follows the travails of Seymour Krelborn, an orphan scraping a living in a run-down florists whose luck seemingly changes when he finds a strange venus flytrap-like plant which he names Audrey II after his colleague with whom he is in love. But the plant has very particular dietary requirements and Seymour finds himself suckered into a Faustian pact as the fast-growing Audrey II brings him fame, fortune and Audrey's love, just as long as he feeds him blood.

There's no doubting that Little Shop... is something of a camp classic but Wilkinson never lets her show go too far - her leads Sam Lupton and Stephanie Clift are thoroughly charming, the latter particularly strong-voiced, and as the apex of their relationship is beautifully done in 'Suddenly, Seymour'. This production also uses a light touch when it comes to the thorny nature of Audrey's abusive relationship with her boyfriend, hardly the stuff of musical comedy but acknowledged nonetheless in the dreamy but pragmatic rendition of 'Somewhere That's Green' - Clift may long for more but she leaves us in no doubt that this Audrey knows what she is settling for.

Sasha Latoya, Vanessa Fisher and Cassie Clare are a sparky young Crystal, Chiffon and Ronnette, the girl-group Greek chorus who watch on balefully and though all three are excellent, there's a real sense of a star in the making in Clare's performance, her stage presence is hugely magnetic and I struggled to take my eyes off her - hers is a name to watch out for in the future. And in a selection of roles including sadistic dentist Orin Scrivello, former X-Factor star Rhydian is also a success, a definite company member.

Matthew Cole's sparingly used but sprightly choreography works wonders on David Shields' intimate but still effective design - the bench is used most cleverly - and Dustin Conrad's three-strong band take us through the glorious doo-wop and Motown-inspired score. It's a very strong production of a fantastic show - well worth the trip.