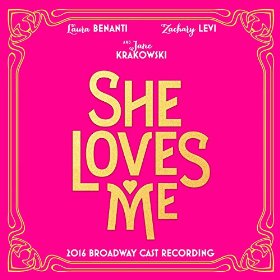 Those outside of Broadway were lucky enough to have the opportunity to see She Loves Me last month as it became the first show there to be livestreamed (here’s my review) but if you missed it, never fear as a cast recording has been released which captures much of what made it an absolute pleasure to watch and to listen to. Sheldon Harnick and Jerry Bock’s Fiddler on the Roof may be better known but I’d argue that Roundabout’s revival makes a strong case for this to be the better show.

Orchestrated beautifully by Larry Hochman and played expertly under Paul Gemignani’s musical direction, it’s hard to imagine the show ever having sounded this lovely and fresh. From the thrill of the overture through the entirety of the score which allows pretty much every character to have their moment in the limelight, She Loves Me has a deceptive simplicity that seem disposable but its old-fashioned charms are revealed in all the splendour here, delivered perfectly by an ace cast.

Laura Benanti’s Amalia Balash leads from the front in great style. Showing us the bruised soul under the brash exterior, she combines comedy and pathos in expert measure, whether in the frothier joy of ‘No More Candy’, the warm humour of ‘Vanilla Ice Cream’ or the plaintive romance of ‘Dear Friend’. Matching her in the character stakes is the brilliant Kane Krakowski, whose Ilona is similarly gifted gossamer-light material which is infused with real depth, ‘I Resolve’ and the comic ‘A Trip To The Library’ thus emerge as real highlights too.

Then there’s Zachary Levi soaring through the title track with exuberant joy, Gavin Creel making caddishness oh-so-appealing in ‘Ilona’, Nicholas Barasch’s puppyish Arpad begging us to ‘Try Me’, there really isn’t a weak spot among the ensemble or across the cast recording. The warm glow that comes from the first instance of the refrain up top as customers enter the shop is carried effortlessly through the end and it is an utterly seductive journey. Basically perfect.