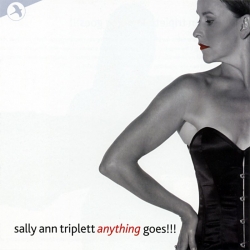 “I suddenly turn and see your fabulous face"

One might take a look at the track-listing for Sally Ann Triplett’s 2003 album Anything Goes and feel a little uninspired - does the world need another version of stalwarts such as ‘Get Happy’, ‘Maybe This Time’, ‘Memory’…? But as the opening notes of the first of those are plucked from a double bass, it’s clear that the answer is actually yes. For the album’s heart is in the jazz club and suitably new arrangements leave these standards sparkling.

‘Get Happy’ becomes a sultry delight, ‘Maybe This Time’ gains some of that desperation that it needs to really pop, and older classics like Cole Porter’s ‘I Get A Kick Out Of You’ and the Gershwins’ ‘Someone To Watch Over Me’ also benefit from orchestrations that highlight their musical genius. That these quieter moments dominate the album show off why Triplett is rightly confident as a powerfully nuanced singer – just listen to the hushed beauty of ‘Angel Eyes’.

She does love a belt too but they are few and far between and so you can’t begrudge her a bone-shaking rattle through ‘Don’t Rain On My Parade’ or ‘Anything Goes’ (the hugely successful NT West End transfer of which she was starring in at the time of release). Not least because of the interesting range of more obscure shows from which songs have been chosen – Golden Boy and Rags – and the range of their orchestrations that mark this album out as a cut above your regular musical theatre entry.