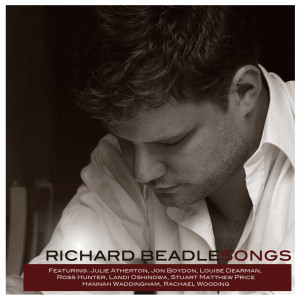 “If we make it through together”

Songs was the debut album from Richard Beadle, a songwriter, composer and conductor of television and production music, as well as a well-established musical supervisor/director on a wide range of West End shows from Betty Blue Eyes, The Bodyguard to the forthcoming The Girls. I actually attended a concert showcasing Beadle’s music back in 2013 but it has taken me a little time to get round to properly listening to the album.

His style seems to sit somewhere equidistant between ‘traditional’ and ‘new’ musical theatre writing – the nervy angst of ‘The Wedding Song’, sung perfectly by Julie Atherton, owes a debt to Jason Robert Brown whereas Rachael Wooding’s beautiful declaration of love in ‘Here We Are’ has a much more classic feel to it. And what comes across these 12 tracks is a pleasing sense of confidence in musicality, these are songs that stand as well individually as in the musicals from which they come.

For me, the quirky humorous side of his writing doesn’t quite click as firmly. Atherton’s ‘I Want A Footballer’ and Jon Boydon’s ‘Hazy in the Morning Light’ are almost too well written to cut loose enough to match the would-be raucous lyrical content and so don’t prove memorable. Beadle’s strength comes from his balladry – Louise Dearman hits two home runs with ‘My Man’ and ‘Forever Young’ and the album’s highlight comes with the haunting ‘1967’ featuring the immense talent of Septa Unella herself Hannah Waddingham.