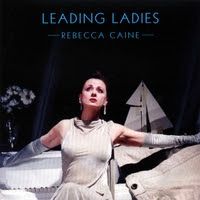 “Oh, how I'd adore it
If you would encore it”

As well as being one of the more entertaining and scathingly witty presences on Twitter, Rebecca Caine is the owner of a stupendous and legit soprano voice which she has forged a career in both opera and musical theatre. Her 2007 album Leading Ladies saw her focus on the latter, celebrating “leading ladies of the British musical theatre stage” from 1909 to 1960, such as Gertrude Lawrence, Jessie Matthews, and Julie Andrews.

Co-created with pianist and sometime singer Gerald Martin Moore, the repertoire may seem light, even frothy, but it is sung with such precise conviction in Caine’s classy, crystalline voice that you can’t help but listen to the music anew. So stalwarts like ‘Someone To Watch Over Me’ and ‘I Could Have Danced All Night’ sparkled as if newly minted, their emotion all the more acute for the poignancy thus revealed.

And as a lot of the music, especially from the earlier part of the era, was new to me, the album acted as a revelation in terms of the range and depth of song-writing for leading ladies which feels somewhat neglected these days. Lionel Monckton’s ‘Moonstruck’, the jaunty ‘Gangway’, the strident ‘Over My Shoulder’ can teach contemporary composers a thing or two. And duets like the marvellously sprightly ‘Do, Do, Do’ from the Gershwins’ Oh Kay! and the tender ‘I’ll See You Again’ by Noël Coward shows how scales don’t always have to be dull.

A glorious version of ‘We’ll Gather Lilacs’ pretty much justifies the price of the album alone but there’s much more to it, not least an introduction to many a leading lady who deserves to be better remembered. I’m off to go and read about Jessie Matthews now.