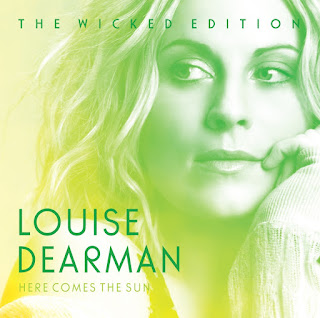 “I don't think you unworthy
I need a moment to deliberate"

Louise Dearman’s second album saw her pivot away from the world of musical theatre to a collection of her favourite songs off the radio, ranging from The Beatles to Sara Bareilles but tending towards a slightly darker, more dramatic side of pop, even pop/rock as a Skunk Anansie cover also makes it onto the tracklisting. It’s a well put-together collection that clearly delivers what Dearman wants to do in broadening her musical identity, it could however stand to incorporate just a little more variation.

Here Comes The Sun is heavy on the vividly orchestral - Alanis Morissette’s ‘Uninvited’ and Randy Crawford’s ‘One Day I’ll Fly Away’ soar on swoops of strings, Bareilles’ Gravity and Dee C Lee's See The Day, more recently covered by Girls Aloud, comes in slightly less melodramatically, and uniting them all is the mightily bright voice of Dearman, clear as a bell whether the forceful anger of ‘Squander’, the Skunk Anansie track, the epic in miniature that is Alison Moyet’s ‘This House’ or the gentle gorgeousness of Bareilles’ ‘Gravity’. Across all the songs, Dearman’s talent for telling stories through music also comes across powerfully.

For me, the album’s highpoint emerges as a sprightly take on Annie Lennox’s ‘Little Bird’, not least because it provides a rare change of tempo, and I also have a soft spot for the lovely duet on ‘Time After Time’ with Steve Balsamo. The Wicked Edition of the album adds a gently acoustic version of ‘Defying Gravity’, sure to please any fans of Wicked and an additional bonus track tacked onto the end will also appeal to friends of Dorothy (and acts as another reminder that uptempo Dearman works well).