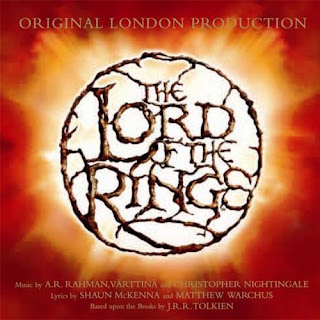 Believe it or not, there was a time when I lived in London and I only saw a handful of shows a month, actually making considered decisions about what I wanted to see. And I have to say the musical of Lord of the Rings did not make the cut (obvs I wasn’t aware of who Rosalie Craig was at that point, or else I would have gone!). The show lasted just over a year at the Theatre Royal Drury Lane and probably lost a shit-ton of money (it allegedly cost £12 million to make) but we do have a cast recording to remember it by.

And what a rather odd-sounding show it is, little surprise really when you consider that producer Kevin Wallace brought on three different composers to complement the book and lyrics by Matthew Warchus and Shaun McKenna. So Bollywood supremo A. R. Rahman, Finnish folk group Värttinä and Lloyd Webber-wannabe Christopher Nightingale all contributed to an altogether epic score, but one which sprawls in an unwieldly manner as these three strands struggle to cohere into an effective whole.

Each one actually sounds half-decent. Rahman’s offerings tend towards the orchestrally filmic, enhanced with haunting vocals as in ‘The Siege of the City of Kings’ and ‘The Final Battle’, splendid in their near-cinematic vision. Värttinä are called upon to conjure the strange folksiness of Middle Earth from the chorale of ‘Saruman’ to the chirpier ‘The Road Goes On’ and ‘Now and For Always’. And Nightingale fires out power ballads aplenty, mainly for Galadriel in the likes of ‘Lothlórien’ and ‘Wonder’.

But even listening to these edited highlights of the show becomes a bit of a slog as the score is too concerned with being atmospheric than actually advancing the plot or deepening character. The reliance on wordless or Elvish singing demonstrates this perfectly, it sounds like a dream but ends up meaning nothing in the grand scheme of things. The quality of the cast provides some bright spots – Laura Michelle Kelly’s Galadriel sounds suitably ethereal, Rosalie Craig’s Arwen is even better (The Star of Earendil is probably my favourite track) and Michael Therriault’s Gollum offers a rare moment of real interest in the internal duet ‘Gollum/Sméagol’ but by and large, it is less ‘my precious’ than ‘my god, really?!’.